Those of you with sons will recognize this situation immediately - your little guy clumping around in daddy's boots.  lol  It was adorable and we all said to ourselves, "Someday he'll really be walking in his dad's steps."  Little did we know that it would seem only days later that he was marching out of the house, headed for college or maybe his first real job, looking just like dad!

This fun image is from Conie Fong and is called "Just Like Daddy."  I colored it with ProMarkers (including the smudge on his t-shirt because we all know that boys get dirty without even trying), and I cut the image with a Gina Marie die.  To cut it as a long, narrow rectangle, I had to cut once, then move the die and cut it a second time.  The die I used is actually about half again as wide.  That's just a tip for how to make your framing dies more versatile.  :-D

I used two blue dp from a Recollections stack and the solid blue background has been embossed with my 'Linen' EF.  I added a wrap of baker's twine as the finishing touch on this CAS and masculine card. 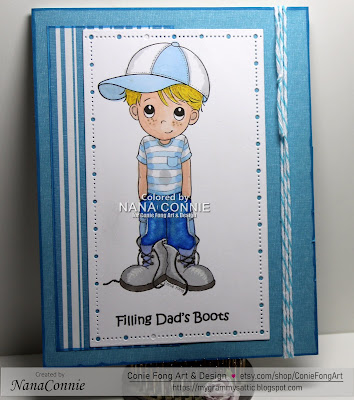 Challenges:
Ally's Angels
As You Like It (see 2nd paragraph)
Aud Sentiments
CCC Digi Creations
Creative Moments
Dies R Us
Digi Doodle Studios
LeAnn's World
Outlawz Twisted Thurs
Scribbles Designs
That's all I have for today.  Be sure to spoil the dads in your family this coming Sunday.  Or better yet, spoil them every day just because they deserve it and we love them!  :-D  Happy Crafting  NanaConnie
Posted by NanaConnie at Friday, June 18, 2021

Great card NanaConnie. That dirt patch on the shirt is a really inspired idea because as you say what boy ever has a clean shirt even 5 minutes after they have put it on! Thank you for entering the Anything Goes Challenge at Scribbles Designs.

Such a beautiful card, thanks for sharing it with us at the Digi Doodles Studio Stamps.
Hugs Ilonka DT

What a cute card. I love it. Thank you for sharing it with us. Have a blessed day today.
www.rsrue.blogspot.com

AW! This is so adorable and wonderful Connie.
Faith x

What a fabulous card.
Thank you for entering our Challenge at
AUD Sentiments
this week. Looking forward to seeing you again in our next challenge.
hugs
Debbie– DT AUD Sentiments
My blog

Such a cute card, Connie! The little guy is really cute and I love that spot on his shirt!!
Hugs Monica

What a beautiful card and a great tip! You are so right about them walking in dads shoes much to quickly. Thanks so much for sharing with us over at As You Like It Challenge Challenge!

This is so cute, Connie! I love that image! Here's the DT hat -- Thanks for joining us at Dies R Us Challenges. Julie, DT member

Such a cute card.
Thank you for joining us at LeAnn's World 101 Challenge
Good Luck
Rose DT