The title of this post is the name of this image from Lacy Sunshine and I'm using it for their "Halloween" challenge.  Eleanor and Pickles are out "Trick or Treat"ing so they're perfect for the theme. 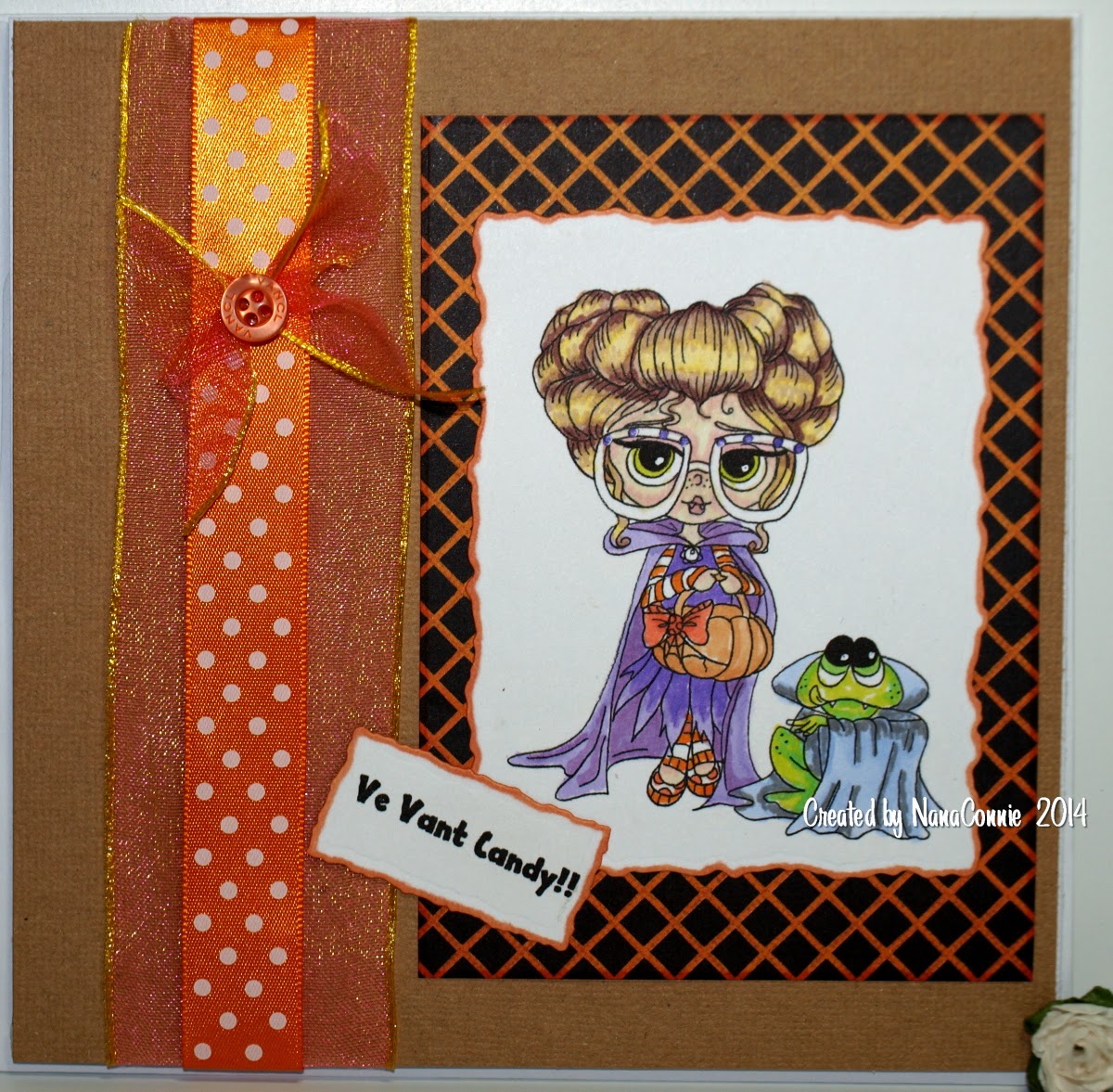 I chose to use the sketch from Sweet Sketch Weds 2
and I took my colors from Simon Says Stamp. 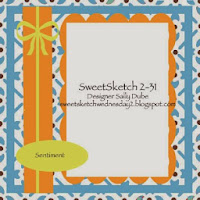 Everything was layered onto kraft CS and I wrapped ribbon from Really Reasonable Ribbon around the kraft piece.  I used a scrap of the wide, wired ribbon, cut swallow-tails into the ends, then twisted it twice in the middle to create the 'butterfly' shaped 'bow.'   I added a button to the middle and adhered it to the polka dot ribbon.

I'll have a second post this afternoon if I get the card done.  I want to show off another of the Doodle Pantry sets released this month and remind you that there are still a few days left to play in the October challenge over there.  See you later and Happy Stamping.  NanaConnie
Posted by NanaConnie at Saturday, October 18, 2014 33 comments:

It's Friday so it's my day for QKR Stampede (woohoo!) and the latest challenge.  Our theme is "The Witch is In."   We want to see witches, in or out.  My QKR Stampede digi is called "Out Riding" so she isn't really 'in', I suppose.  :-D  She's out having fun, the way witches will do. 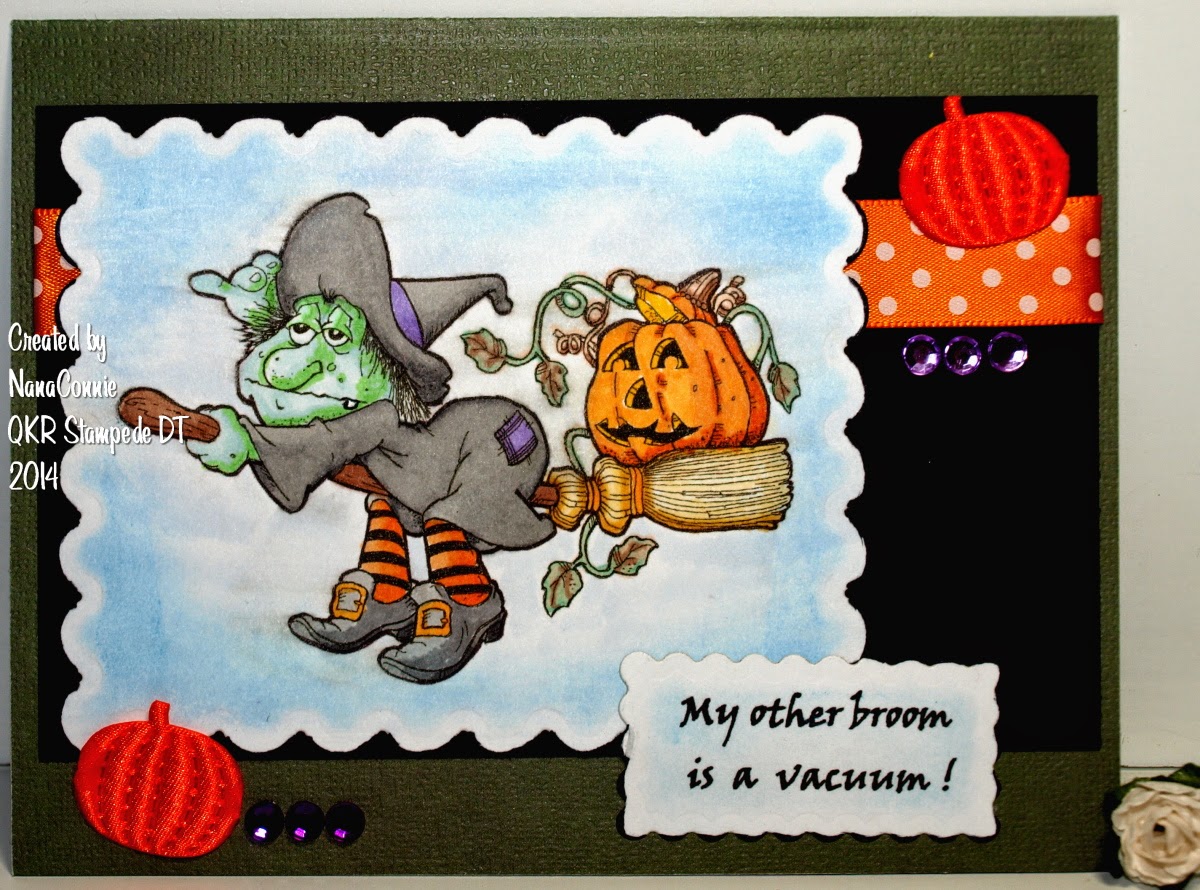 I used the sketch from Outlawz,  turned 1/4 turn
and colors from Creative Colors.

I colored the image with my beloved ProMarkers and die cut it with a die from Spellbinders .  I 'sponged' the sky with chalk while the image was still in the die.  I wrapped orange polka dot ribbon (Really Reasonable Ribbon) around a scrap of black CS then mounted the image on top.  The silly sentiment is mine, though I may have seen it somewhere last year and revived it.  Apologies if I'm claiming it and it actually was yours.  It's also die cut.

All of that went onto a brown card base (which has a greenish tinge in the photograph - who knows why!)   The pumpkins and the gems have all been locked away in my stash (translate hoarded) as though using them might diminish them in some way.  "Why buy things and then hoard them?", I keep asking myself.  Sheesh!

For some of us, today starts the weekend and for others it starts later tonight or tomorrow, depending on how you figure it.  However, I hope your plans include some time just for you.  Maybe you'll want to be creative and do something for our challenge.  You're not required to use a QKR Stampede image but if you do, you have an excellent chance of winning more QKR digis because we do a drawing just for those who use them.  If you use other digis, that's fine, too, and you still have a chance to win.  Come play with us this week.  The witch is in!  Happy Stamping.  NanaConnie
Posted by NanaConnie at Friday, October 17, 2014 38 comments:

It's Friday so that means a new challenge at QKR Stampede and this week our theme is "Frightfully Delightful."  Dig out those Halloween stamps -- either frightful or delightful -- and play along.  You could win some fabulous images!   My card is done using Digi 12303, "Jack-O-Lantern."  The sentiment is my own. 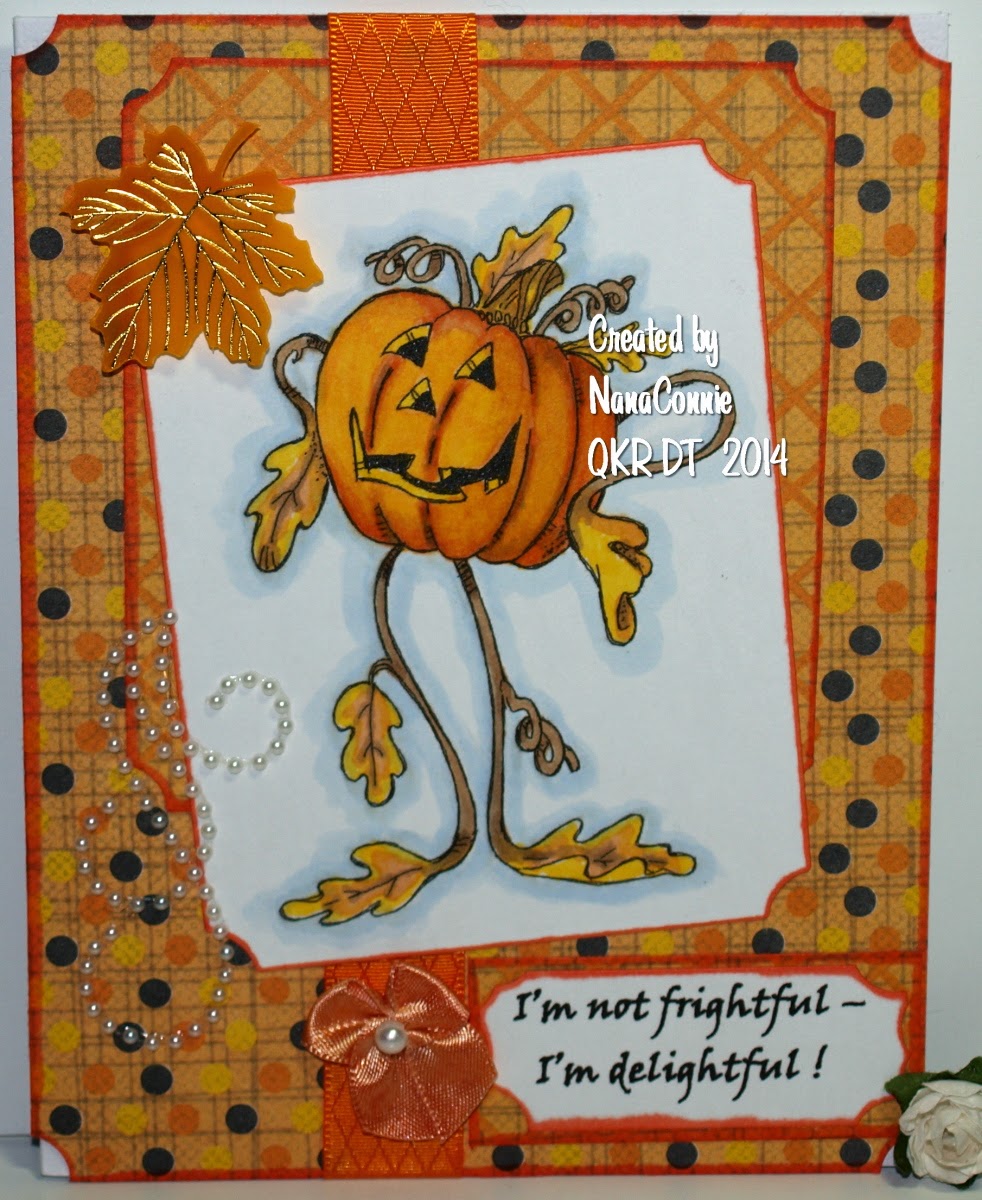 Sketch from The Sweetest Thing
turned on its side. 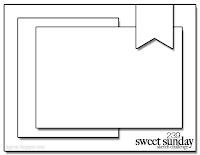 The image is colored with ProMarkers and die cut with the largest die in one of my Spellbinders sets.  The papers have been in my stash for so long I can't even remember buying them.  Each of the papers were corner punched so that they would look like the die cut image piece.  Ribbon is from Really Reasonable Ribbon and the little bow is one of those I make myself.  I dyed it with a ProMarker to get that mango-orange shade.  The pearl swirl seemed to say "windy autumn" and the leaf is made by Jolee's.

I hope we're going to see you playing along at QKR Stampede this week.  You're not required to use a QKR image but if you do, you'll be in a special draw just for those who use QKR digis or rubber stamps and that will increase your chances of winning by a ton!  Get your Halloween on and come play along.  :-D Happy Stamping.  NanaConnie
Posted by NanaConnie at Friday, October 10, 2014 24 comments:

I have the most exciting news!  For a couple of years now, ever since I was a GDT for their challenge, I've been slipping over to the store at QKR Stampede whenever the budget allowed and I've also played in the challenges over there nearly every week.  I'm really crazy about their images!!  I've specifically used QKR images to improve my coloring skills over the last several months and now I've been invited to join the QKR Stampede DT !  I'm just over the moon about that.  :-D  So, today's card is my first as a DT member.  Our challenge theme this week is the always popular "Anything Goes."

I did a card in fall colors, using the "Bunny and Butterfly" image as a way of looking back at summer while turning toward a gorgeous fall. 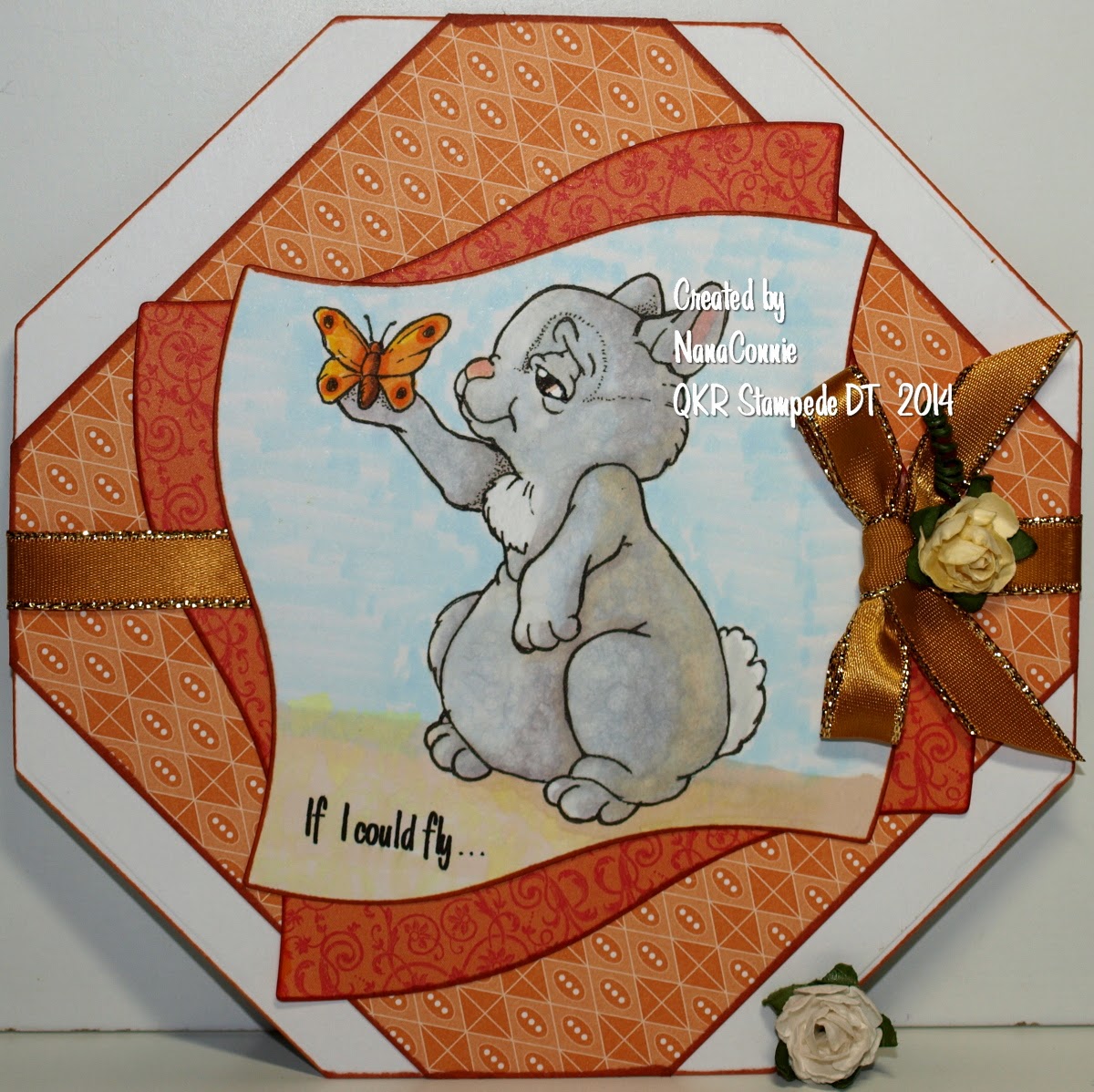 The image is colored with ProMarkers and then die cut with a Wonky Square die from Spellbinders.  The sentiment was added when I printed the image.  I cut a second Wonky Square out of dp from my fall stash (two or three years old -- who knows?) and distressed the edges of both pieces.  I used an octagon die from QuicKutz to shape the card itself and layered on dp from SU, then trimmed it to fit the octagon.

My three finishing touches were the ribbon, the bow and the flower.

I really hope we're going to see you playing along at QKR Stampede this week.  What better week to play than when the theme is Anything Goes?  You don't have to use a QKR image to enter but if you do, you could be the winner of a separate draw just for QKR Stampede users.  :-D  Happy Stamping.  NanaConnie
Posted by NanaConnie at Friday, October 03, 2014 26 comments: