I intended to share this card with you back in February but then I got sick and was hospitalized with Covid-19 and the card never made it into a post.  This was my eldest granddaughter's birthday card this year and she's the one who loves dragons as much as I do.  Yes, she loved it!  :-D  She's also a lover of CAS cards so I kept this one pretty simple; just background, image, and a bit of fiber. 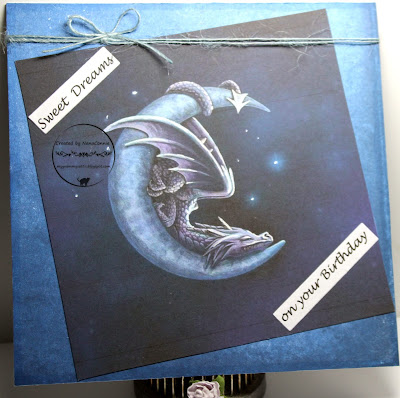 I'm sorry but I don't remember all the supplies I used to make this one but that might be because I was fighting the early days of Covid without realizing just how sick I was.  I know the sentiment bits were cut with Avery Elle dies and the lighter blue background paper was done with water color paints but that's about all I know for sure.  Oh, yeah, I used a white gel pen to add the highlights to the dragon and the fiber came from an old sweater.
Challenges:
Addicted to CAS
Allsorts
Aud Sentiments
Creative Fingers
Gem of a Challenge
Outlawz Festive Fri
Paperbabe
Pattie's Creations
Polkadoodles
Happy Crafting.  NanaConnie
Posted by NanaConnie at Tuesday, March 30, 2021 12 comments:

3 Days to Make a Card

It's been nearly 2 weeks since I posted that I was home from the hospital and I had no idea that my recovery was going to be so slow.  I figured that by now I'd be off the oxygen (NOT!), the daily nurse would have been sent packing (nope, but only coming twice a week now), and I'd be making at least one card every day (HA! Not.)

I didn't want to miss out on the Outlawz Progressive challenge which features this darling image from Paper Nest Dolls, called "Lulu Bee," so I sat down to color her (ProMarkers and sparkle gel pen) and discovered that I could only work on the image for about 15 to 20 minutes and then I had to lie down and rest.  I spent 2 days getting the coloring done, then started on the card layout.

I figured if I did a really CAS design, it would go quickly.  I picked two, different size, rectangle dies (QuicKutz) to cut the image and the black frame and, after that simple step, it was back to resting for an hour.  I cut the sentiment with a die from Avery Elle, layered it onto the image, then put the image and black frame together.  Another rest period.  Sheesh, was I ever going to get this card made?

The yellow CS for the base was on the craft desk and worked well with the image colors so I grabbed it, scored it to make it an A2 card base, then added the image piece.  I dug through the basket of signature bows I keep on hand, found a black one, and added it to the top corner.  By that time, daylight had fled so I waited until this morning to photograph the card, edit it, and have it ready for the post.

But writing up the post has taken two sessions with rest breaks in between and I still don't have the photo posted.  lol  OK, finally, here's that CAS card. 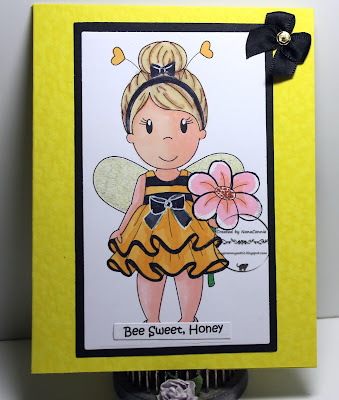 Gathering all the links for the challenges took 3 sessions with 2 rest periods!  lol  Happy Crafting.  NanaConnie

I think the fastest way to get the word around is to post this on my blog.  I have been released from the hospital and pulmonary recovery facility after more than two weeks of treatment for COVID-19.  I still have daily in- home nursing care being provided and am pretty much bed ridden for another couple of weeks but it's good to be in my own home with my fur babies, even if it means being on oxygen.

Hopefully, I'll have half an hour or so when I can sit up at the computer again tomorrow and I'll do my best to get a message out to all my DTs.  :-D

I have a huge pile of beautiful cards sent by so many of you and I love each one.  Thanks for all the prayer and strong thoughts on my behalf.