I just have to share another Christmas card with you because I love the stamp so much.  It's one of my favorite Penny Black stamps and it doesn't even have one of the Hedgehogs in it (which just happen to be my favorite PB critters)!   Don't you just love the little bird bringing a gift for the girl in the swing?  Too precious! 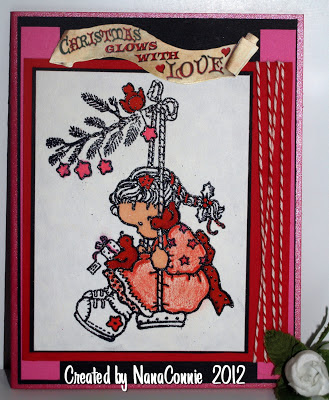 I'm not sure how I decided black, white and reds for the color combo but it just seemed to work.  The image is stamped and heat embossed, which gives it some sparkle, and then colored with watercolor pencils and Copic markers.  The card base is metallic maroon-red CS.   The sentiment paper was colored with a broad tipped, gold-metallic paint pen before adding the sentiment.  Afterward, I painted over the sentiment with Creative Inspirations "Fairy Dust" paint for some shimmer, and then fussy cut the sentiment.

The best part of this card is that it's going to be given to a young girl who's getting a swing set from Santa, so the card is perfect!

We're creeping closer to the big day and Santa's really under pressure to get everything packed into his sleigh for Christmas Eve.  I'm having a wonderful time and feeling no pressure at all since my preparations were done by last weekend!  All that's left is enjoying family time and grandkids.  :-D  Happy Stamping, my friends.  NanaConnie
Posted by NanaConnie at Friday, December 21, 2012 25 comments:

This card is one of those that just worked exactly the way I had it visualized in my head.  That doesn't happen all that often, I'm afraid.  Anyway, that means I'm inordinately pleased with it.  :-D 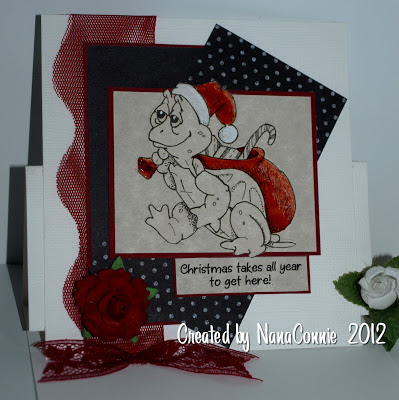 The digi is "Turtle Santa" from QKR Stampede, where their theme is 'It's beginning to look a lot like Christmas', and the sketch I used is from Seems a Little Sketchy. 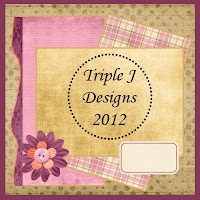 I chose to use the Play Date Cafe challenge of "Black and white with a splash of maroon."  He's colored with maroon gel pen, which is hard to 'shade', but since I had one pen about to run out of ink, I managed to get some light maroon on one side of the bag and hat.   DP is from DCWV's Le Creme stack, and both the dp and the maroon CS I used for matting were pieces left over from other projects.  The flower was the last one I had of that color and it's been hiding in my stash for who-knows-how-long.   I'm still on a campaign to use up leftovers and bits.  You know the ones -- too big to throw out but too small for most projects.  :-D

The tulle is from SU and I folded it to get a double layer for a bit more color.   I made it into an easel card, something I haven't done for a while, but I have a granddaughter who just thinks they are the 'kewl'est thing ever, so...

I hope your weekend has been going well.  We've had rain, and wind, and a bit more rain so it's a good crafting weekend.  I'm all caught up on my DT cards for next week but I have a couple more 'just for fun' projects I want to finish.   Maybe I'll be able to share them with you later in the week.  In the meantime, Happy Stamping.  NanaConnie
Posted by NanaConnie at Sunday, December 02, 2012 41 comments: