More summer fun on its way today with this wonderful image from QKR Stampede and it's all about the running debate every vacation time over whether to swim or sunbathe.  :-D   The secret is to swim until your body gets cold, then go back and sunbathe until you warm up.  Repeat the cycle endlessly until the daylight is gone. 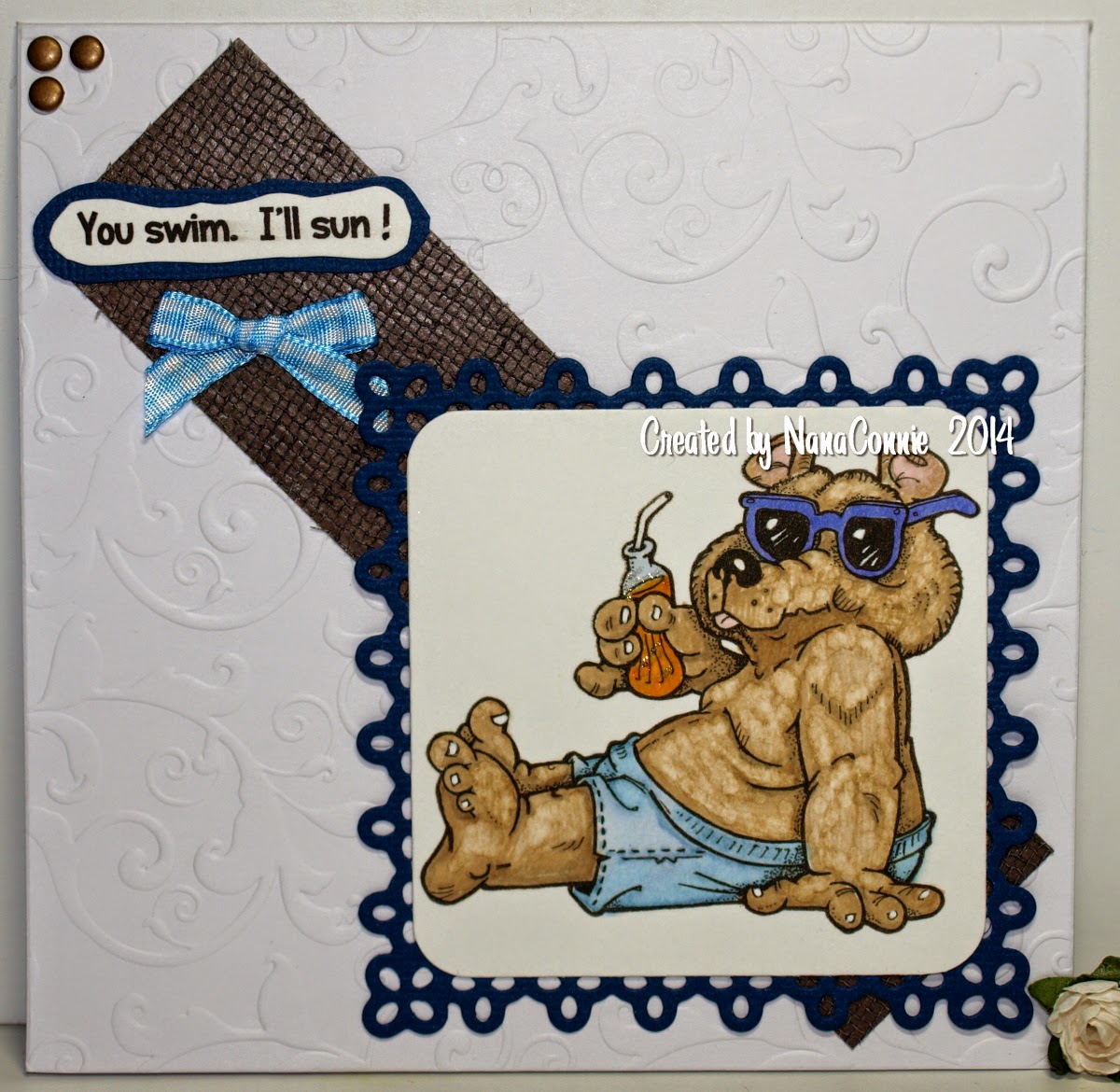 The image is colored with ProMarkers and a bit of sparkle gel ink, with white gel ink on the sunglasses.  The card base is embossed.  The image is corner punched and the mat is die cut.  Sentiment is printed, fussy cut and matted, then fussy cut again.  I added a strip of gauze paper behind the image (a left over scrap). then found a scrap of gingham ribbon for the bow and finally added the three metal brads to the corner.

Have a warm, summer day -- at least in your heart if it's cold or rainy outside.  :-D  Happy Stamping.  NanaConnie
Posted by NanaConnie at Wednesday, July 30, 2014 19 comments:

I've done this card for Through the Craft Room Door, where our theme is always "Anything Goes."  Our sponsor this challenge is AuroraWings and I totally love coloring their images!   I used this one ("Flower Ballerina") to make a birthday card. 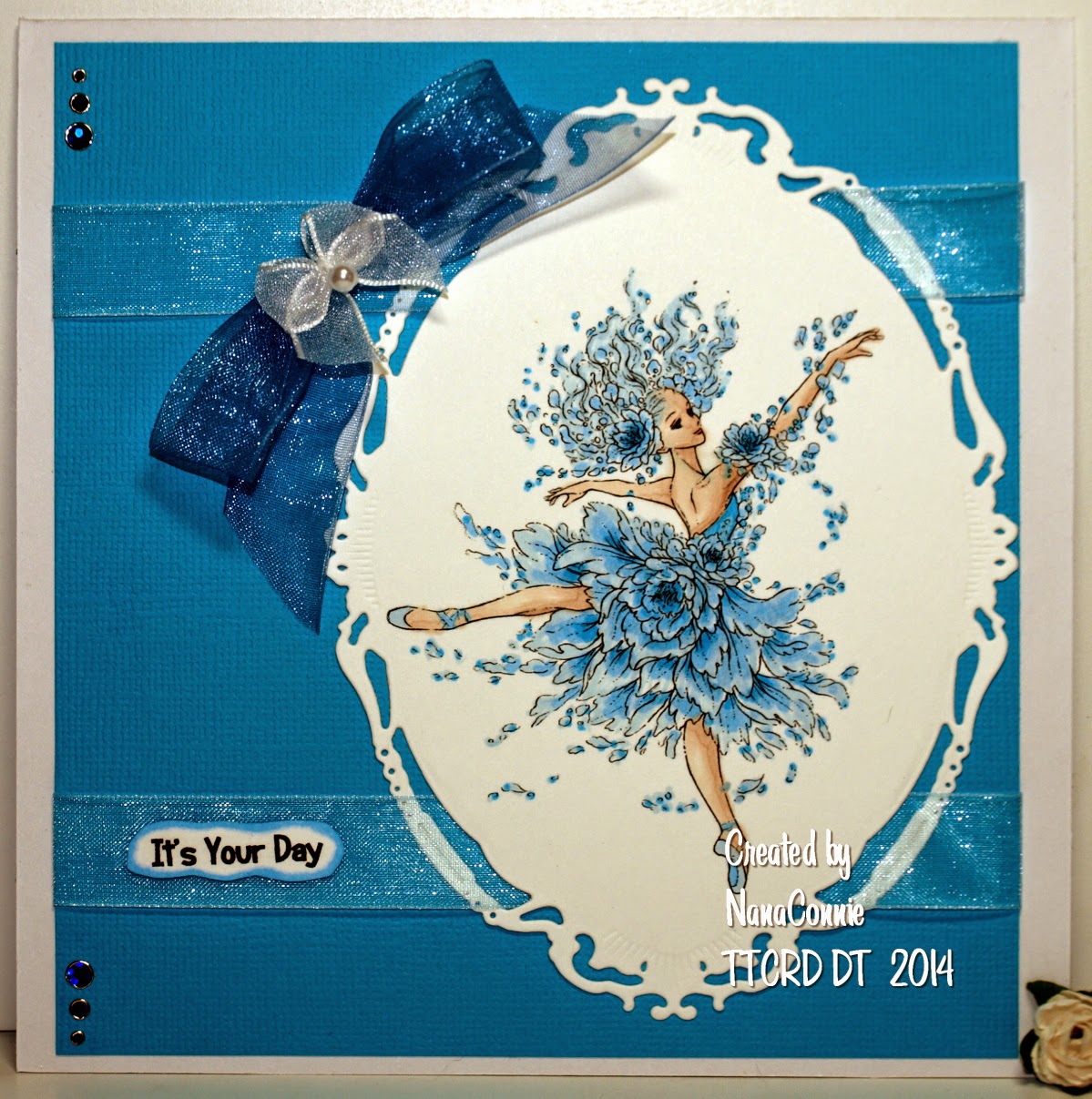 I used ProMarkers to color the ballerina fairy and a die from Spellbinders to cut it.  All the ribbons are from Really Reasonable Ribbon and you can read all the details in the September issue of Through the Craft Room Door magazine.

I'm excited to be part of the team at Through the Craft Room Door.  That's been a dream of mine for a long while and I just couldn't wait to say "Yes" when they invited me to join.  Take a look around the TTCRD blog, play in the challenges (the theme is always Anything Goes), and get your issue of the next quarterly magazine by subscribing.  Not only are there lots of fabulous project and tutorials, but there are free digital stamps in every issue.

I had an uncle who insisted that fishing was a sport, but my dad always said a day spent fishing was like taking a vacation.  Since he often took me fishing with him, and it always felt like special father-daughter time when he did, I guess I don't really care which it is -- I just love going fishing.  It brings me such sweet and wonderful memories of him.  :-D

Here's a card I know he'd love, including the lovable turtle character.  That came from QKR Stampede. 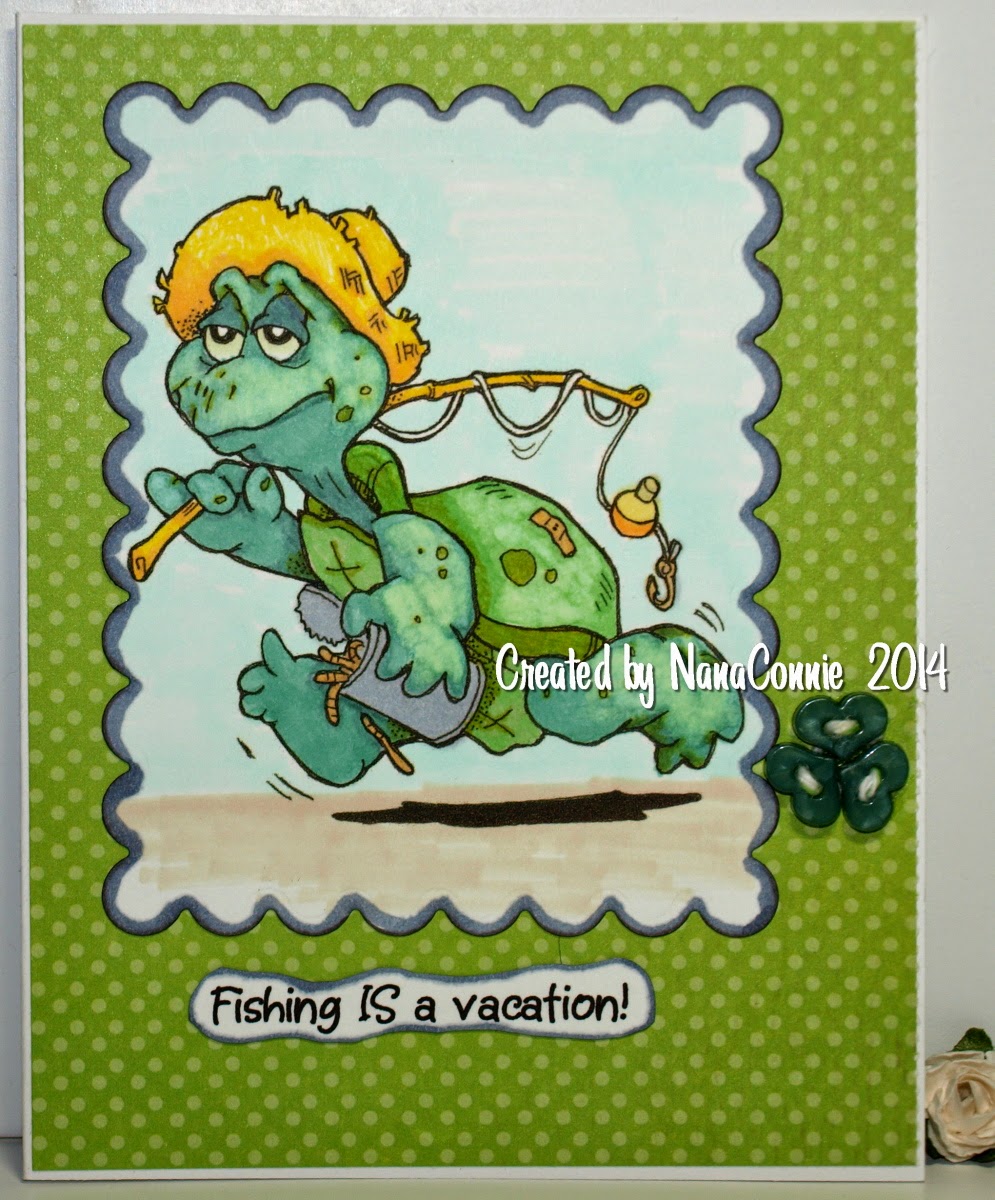 I used the sketch from STAMPlorations
and Citrus/Tropical Colors from Craft Your Passions.

The image is colored with ProMarkers, then die cut with a die from Spellbinders.  I inked the edges, typed up the sentiment, and found the three, heart-shaped, buttons in my stash.  I strung them together with baker's twine and adhered them to the dp on the front of the card.  The dp came from Colorbok.

Hope your weekend is going well and that the weather is decent.  If it's too hot or too cold, maybe you should be inside crafting!  Happy Stamping.  NanaConnie
Posted by NanaConnie at Saturday, July 19, 2014 26 comments:

I made this card with an image from Beary Wishes named "Relax" and it's the ultimate in serenity.  If ever there was an entire vacation wrapped up in one card, this is it!  :-D  A trip to the Orient right here in this design.  The best part?  It's a freebie which you can find right here. 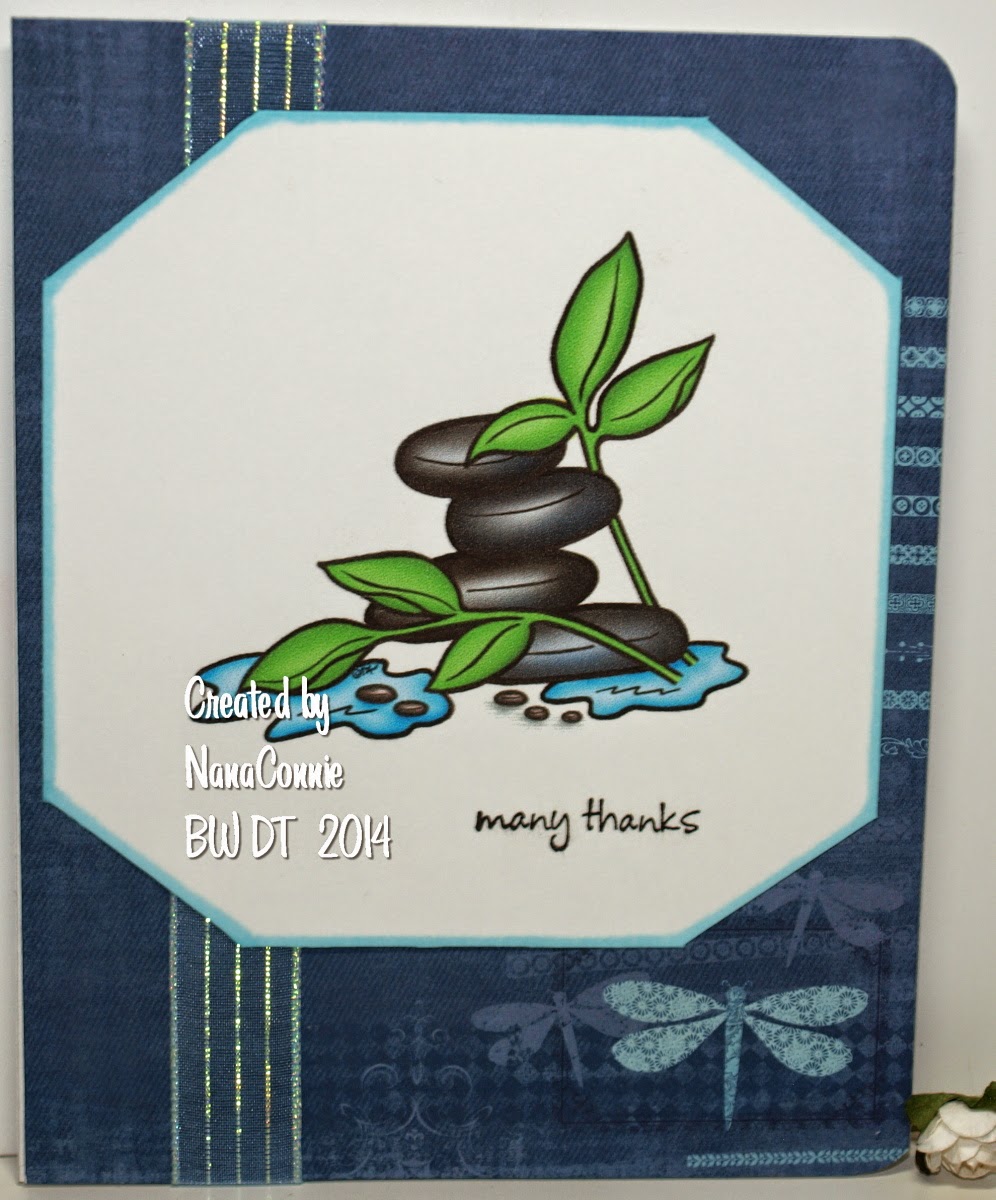 I have no idea who made the background dp because it was in my scrap basket but the striped ribbon is from Really Reasonable Ribbon.  I don't think this needs much explanation because it's so CAS.  Of course, that means it's also a perfect masculine card.

GDT at Crafting by Designs

I have the honor of being a Guest Designer at Crafting by Designs where the new theme is "Use a Die."  How simple is that?  Crafting by Designs is one of my favorite places to play along in challenges and this time, the challenge is sponsored by Oak Pond Creations, some of my favorite digis!!  It all worked out beautifully.  I browsed around in my ever-growing collection of  Oak Pond digis and chose this glorious fat cat.  Don't you love it?  I think this one will just hang on my refrigerator door as a reminder that I don't really need that second helping of dessert and that a glass of no-calorie, sparkling water might be just as good.  OK, not as good as that chocolate cupcake fat cat is dangling from his tail, but healthier. :-D 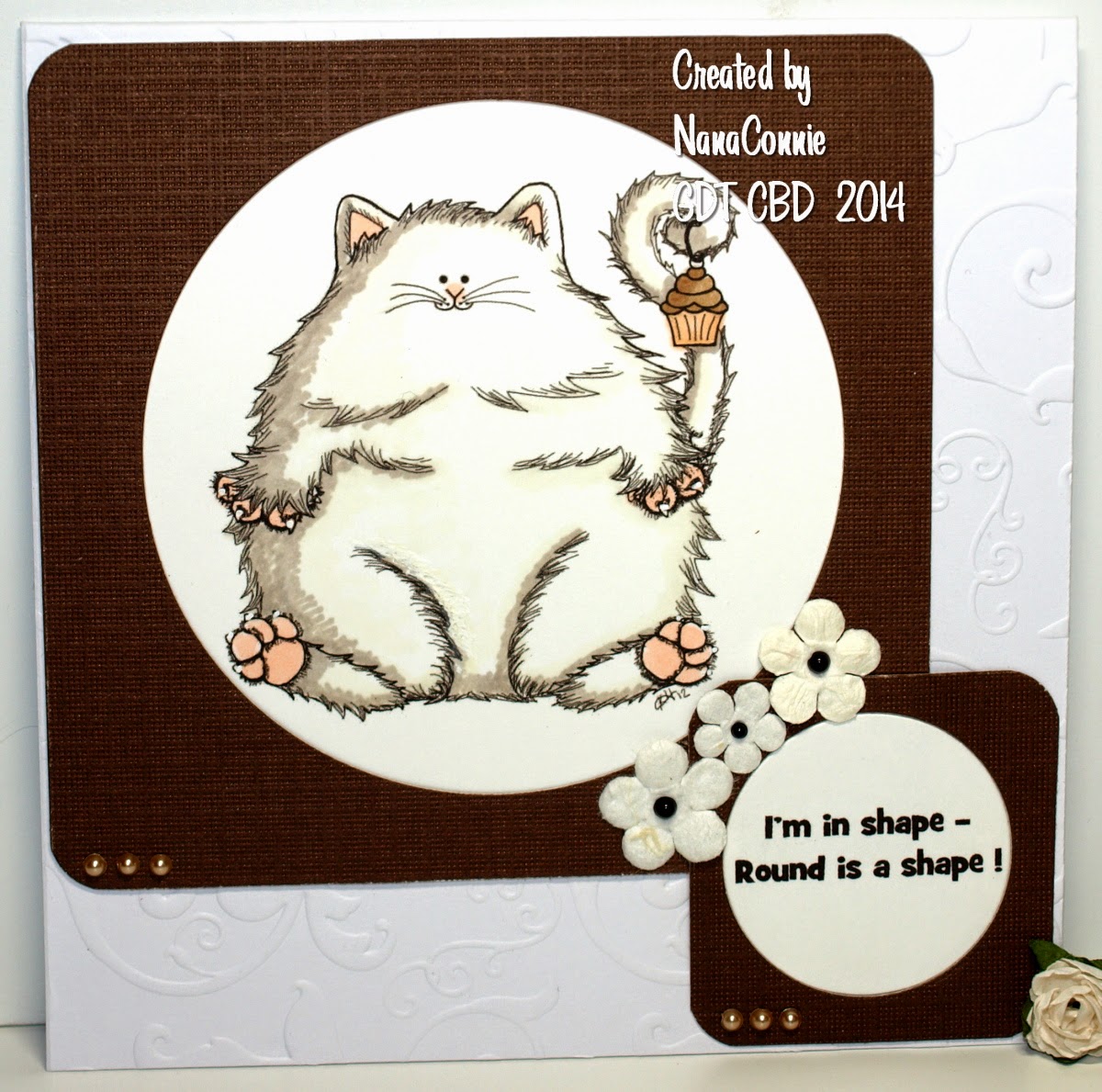 The image is colored with Copics and ProMarkers, then die cut with a circle die.  The sentiment is printed with a computer font and also die cut with a smaller circle die.  I die cut 2 rounded rectangles and layered the circles on top.  I added some flat flowers, put gems in the center of those, and added the pearls to each rectangle.  This is a card that's simple enough to be a masculine card, but could just as easily be a feminine card.

Remember the other day when I said I think I prefer animal images to images of people because they're easier to color?  After the simple coloring on fat cat, I'm absolutely convinced.  :-D

Challenges:
613 Avenue Create
A Gem of a Challenge
Animal Friends
As You Like It
Aud Sentiments
Bearly Mine
Brown Sugar
Great Impressions
My Sheri Crafts
Robyn's Fetish
Sisters of Craft

I'd love to see you playing along in the "Use a Die" challenge this week.  Other than having to use a die, it's wide open so a very simple challenge.  Happy Stamping.  NanaConnie
Posted by NanaConnie at Tuesday, July 08, 2014 26 comments:

As soon as I saw this digi from QKR Stampede, I thought about a saying my dad always used.  "You're as spooky as a long-tailed cat in a room full of rocking chairs!"  I think this is perfect for a Get Well card, don't you? 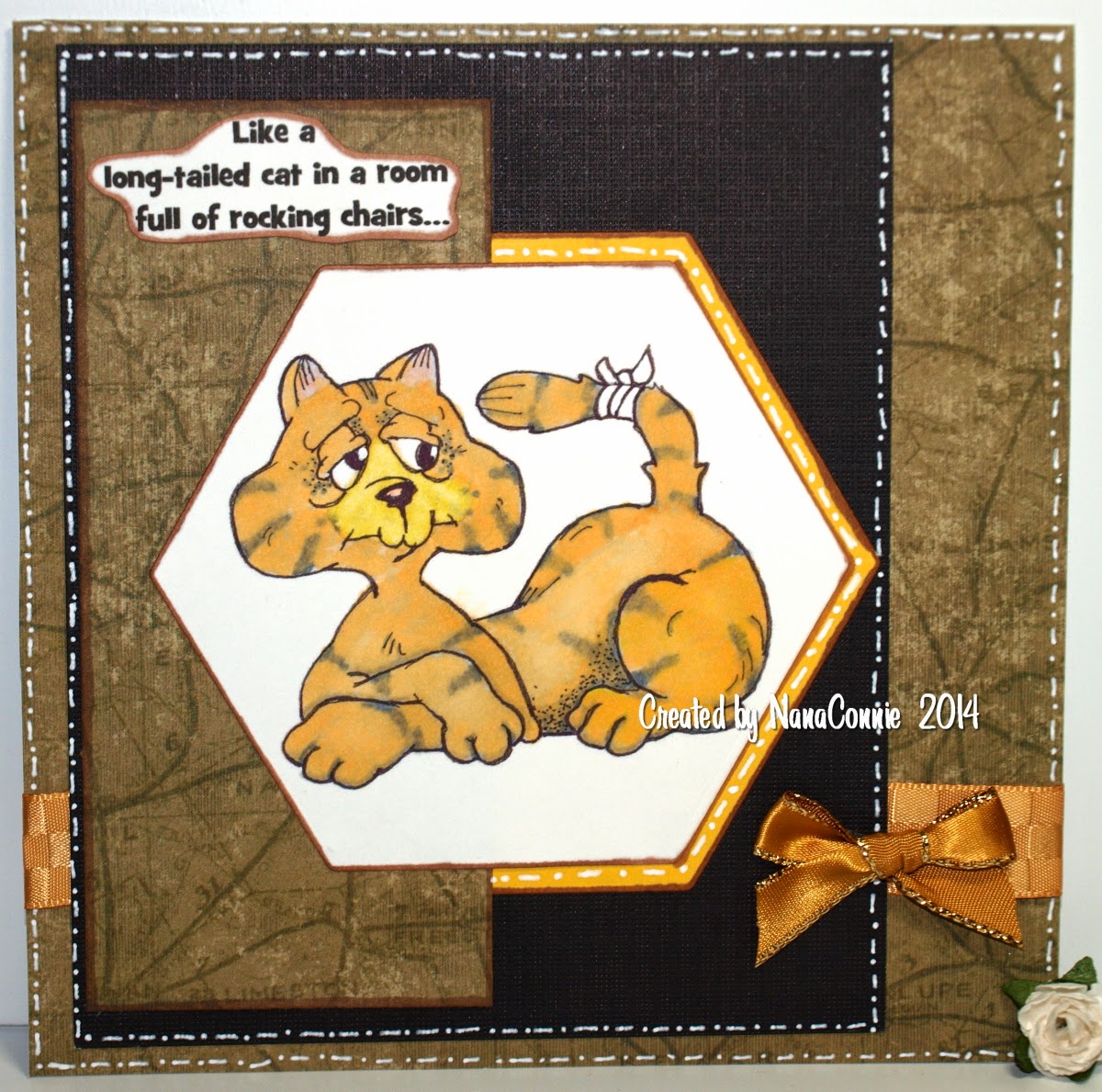 I used the sketch from Sunday Sketch & Stamp. 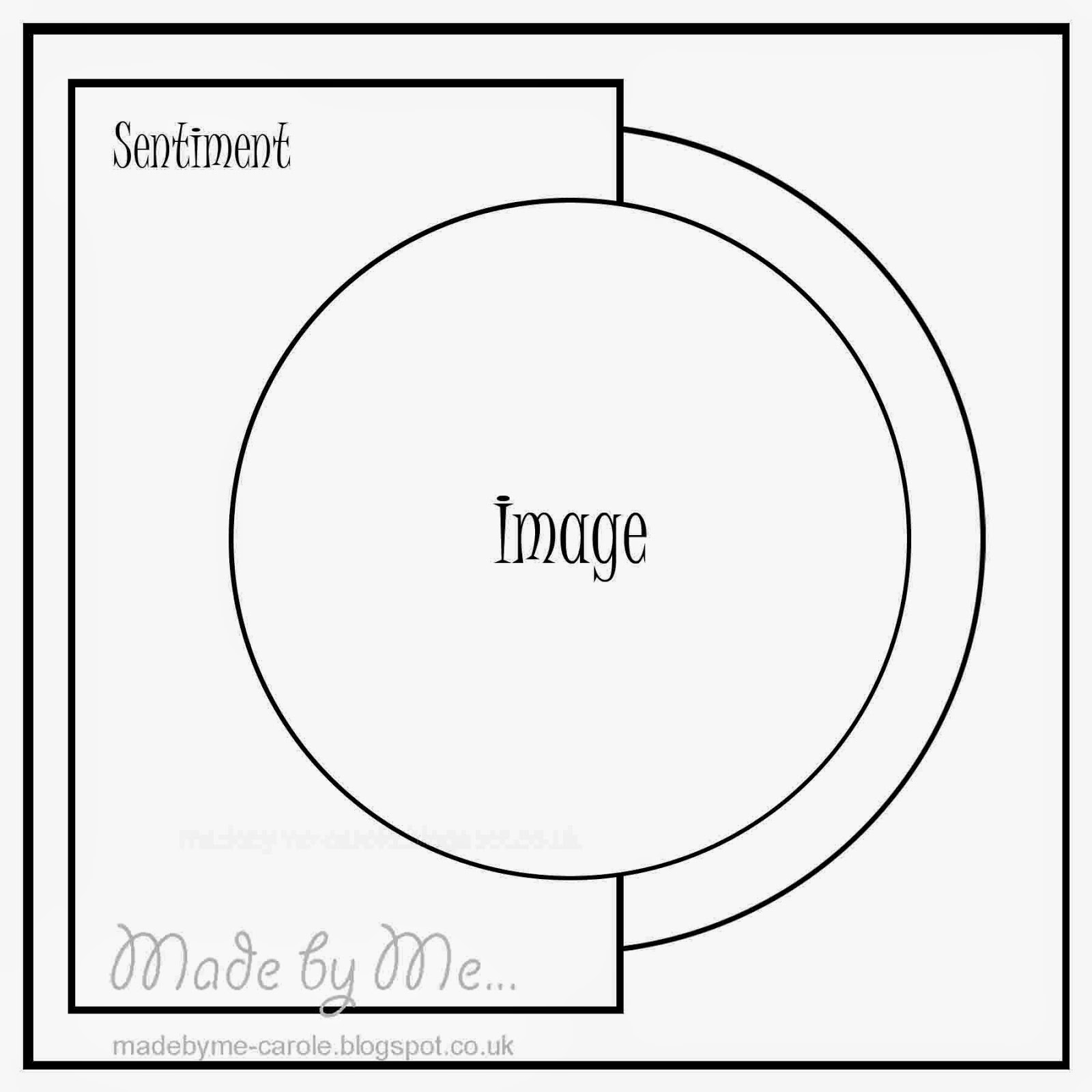 I colored the image with my favorite ProMarkers.  It's die cut  and matted with inked edges to make it look a bit distressed.  The paper is from Colorbok and both ribbons came from Really Reasonable Ribbon.  I did the faux stitching with a white gel pen.

I hope you got a smile from this one.  Happy Stamping.  NanaConnie
Posted by NanaConnie at Tuesday, July 01, 2014 15 comments: