Today's card is one I ended up really liking but wasn't sure about it when I first started designing it.  I used an adorable new release digi set from Doodle Pantry (see photo below) and believe me when I say that the image wasn't the problem!   In fact, this set came to the rescue and saved the day!  :-D  OK, let me give you the background first --

I have a new neighbor who moved in next door last weekend (more about her on another post I'll get up this week).  I intended to get a plate of cookies made to take over but my extra busy work week last week just got in the way.  Anyway, she came over, introduced herself, and asked if I might have a light bulb to spare since she couldn't find the box containing hers and she had none for her bedroom lamps.  I had been working at the dining room table and she saw a couple of cards I was making.  I immediately got an order for a new baby card.  :-D

However, her friend's daughter (the one expecting the baby) is having a boy and hates blue!   She refuses to do the whole 'blue for a boy' thing and is doing the nursery completely in neutrals, which works fine for a boy, but just isn't what we normally do for baby cards.  So, Doodle Pantry to the rescue! 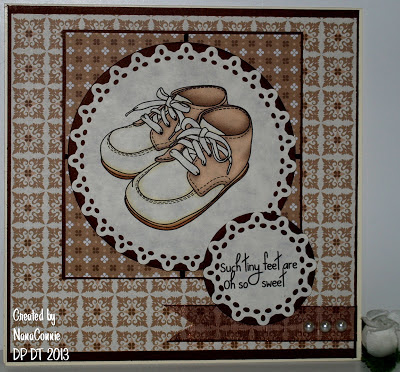 I found the sketch at Tuesday Morning Sketches. 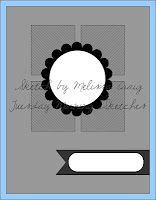 Laurie included wonderful digital papers with the "Baby Shoes" set, including the two I used which are in wonderful neutral tones.  I die cut the image with a die I bought more than a year ago and haven't used recently and also die cut the sentiment (part of the Baby Shoes set) and matted them both with brown CS which has been in my stash for a good, long time.  I also matted the dp with it.

I added a strip of sheer brown ribbon and adhered the three little pearls to it.  I thought that was still a very CAS design, lots of open space (though not white space,) and with an overall masculine feel to it.  I wasn't sure I was going to like a baby boy card without blue on it, but I am very pleased with it after all.

Half the weekend is now gone and I've done nothing but spoil myself !  I've done no laundry, no house chores beyond fixing something to eat when I got hungry, and haven't even run a dishwasher.  Guess what, the world hasn't ended and I've not been struck by lightening.  How refreshing.  :-D  Happy Stamping.  NanaConnie

It did cool down somewhat on Sunday but I still stayed in and made cards.  This one had me smiling and thinking of my granddaughter who adores dragons.  The sentiment fits her pretty well, too, and it just seemed to express in words what's on the dragon's face.  :-D  The image is from QKR Stampede and their challenge this week is "Ribbons and Bows." 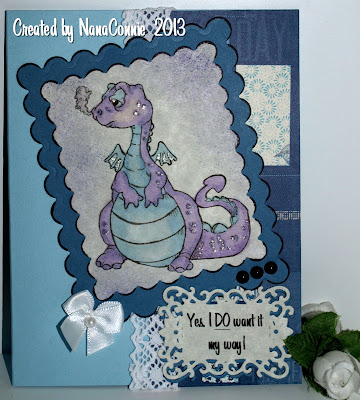 The sketch came from Sweet Stop. 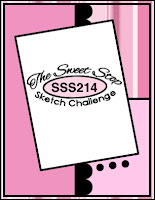 I used my Promarkers to color the image and added Stickles to a few spots on his wings and body.  He's die cut, then matted with a die cut a size larger.  The dp is from DCWV, Juniper Berry stack.  The sentiment is mine, done with a computer font and then die cut with a lacy die.  The lace ribbon was in my stash and the bow is one of those I make and keep ready in my stash.

I know those can be found at Joann's and other fabric shops but they're so expensive that way, and since my mom taught me how to sew those together years ago, I prefer making my own.  That way, I have more variety in colors than I can get at the craft stores.  I did notice that I'm in need of more pearl beads soon, though, so have added that to my shopping list.  What a great excuse to head off to the craft store.  :-D

We're starting the new work week today and I wish I could stay home instead of going to the office.  Ah well, it's the work days that make the days off more special.  Have a browse around while you're here and Happy Stamping.  NanaConnie
Posted by NanaConnie at Monday, June 10, 2013 30 comments:

New challenge today at 613 Avenue Create and we're sponsored by the generous and wonderful Paper Shelter!  I am growing my collection of their adorable images and having one more added is a pleasure.  Our theme this week (in addition to the Anything Goes which is always our theme) is "Congratulations" -- any event for which you might wish someone congratulations; wedding, anniversary, new baby, graduation, promotion or new job, ... you get the idea.  I used the "Wedding Couple" image from Paper Shelter. 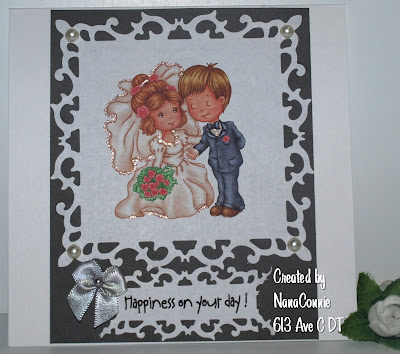 The image is cut with a "Fleur de lis" die from Spellbinders and the sentiment was computer printed and then cut with the same die.  For the sentiment, I just cut the top and then shifted the position of the die to the bottom.  That set is all squares and none of them fit the shape of the sentiment so I did some adjusting.  I think the cut is rather interesting.

I added glitter ink to her gown and veil, pearls to the corners of the fancy die cut, and a bow I made using silver ribbon and a silver bead "pearl."  Although the background looks dark gray, it actually is a light bronze to match the shading in her gown.  But it has a metallic shimmer to it at certain angles and photographing it was a real chore.  Consequently, it looks dark gray in the photo, which is OK because that matches up with his tuxedo.  I've had that paper in my stash forever and still have 3 more sheets of it.  It's taken me that long to decide how to use it.  :-D

I really hope this posts.  I'm having some intermittent problems with my internet connection but I don't know if that's affecting Blogger in any way.  Enjoy the rest of your weekend and come play with us at 613 Avenue Create.  Happy Stamping.  NanaConnie
Posted by NanaConnie at Sunday, June 09, 2013 25 comments:

I had no idea when I first saw this new release "Rooster" set at Doodle Pantry that I'd be making it into a Father's Day card !  Quick story  and then I'll show you the card.

I was very short on time, having been gone so much of last month so I printed a pre-colored version of the rooster (doesn't Laurie do a great job of coloring?)  I had it lying on my computer desk when an out-of-town friend dropped by unexpectedly.  I was thrilled to see her because it's been nearly 6 years since she moved and we've only been able to e-mail and talk on the phone occasionally.

She saw the rooster, asked what I was going to do with it and, when told about my card making, asked if she could get a card for her husband.  His birthday falls on Father's Day this year and she wants to give him a card that works for both occasions.  :-D

They live in a high-population, suburban area close to Seattle.  It seems that someone, some years ago, let some chickens go free in the hills of their neighborhood and her husband is frustrated by being awakened at the crack of dawn every day by an extremely proud and loud rooster!  LOL

As soon as she told me this, I had to go back and print the sentiment I used, which is also part of the "Rooster" set.  I hope Rich has a sense of humor about this card.  :-D 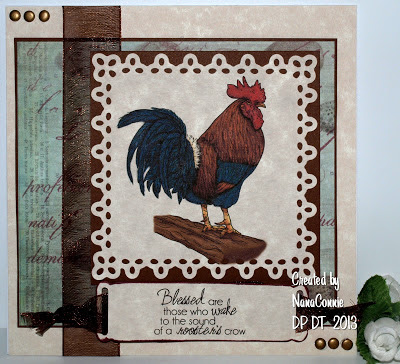 Sketch is from Sketch n Stash. 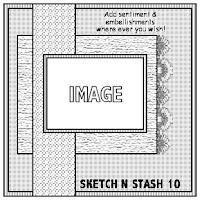 I die cut the image and matted it with brown CS.  The background dp was in my stash and it was a leftover scrap.  The sheer brown ribbon came from my local craft store.  The sentiment is die cut also and threaded with that same ribbon.  Although it's a bit hard to see in the photo, I just tied the ribbon ends in a know and cut them on an angle before attaching the sentiment piece.

Since it's a masculine card, I added three brads to each of two corners and called it finished.

OK, that's it for today.  I hope your weekend is going well and that you're finding lots of "me" time, with things fun and relaxing.  If you want to see a photo of the entire Rooster set, see below.  Don't forget that our new Doodle Pantry challenge starts today at 10:00 EDT.   You are required to use a Doodle Pantry image on your entry, but then you get a free set ("Quirky Stork" - see below) just for entering the challenge.  In addition to that, you will get "Vintage Cooking" (see below) as a freebie with any purchase made before June 24.  How can you lose?  Buy a set, get a freebie, use one of the images to enter the challenge and get another freebie set.  Three sets for the price of one, and they all include digital papers, too!  Happy Stamping.  NanaConnie