It's time for the dreaded "Q" day at 30 Days of Holidays - Beccy's Place and I'm doing another "Quilt" theme.  Last year, I used an image of a quilted stuffed animal for this card but this year I decided on the spice-filled mitten, one of Beccy's images, and a Quilt die from Gina Marie to make the background.

I have a crafting friend who loves making quilts (as did I for many years) and she has even made quilt-pattern stencils for her scrapbooking.  I don't have that kind of patience and would much rather use a die (especially since I only have less than half a dozen stencils in my entire collection!)

I cut two different colors of CS, plus two different scraps of Christmas dp which I had in my stash.  Unfortunately, one of those scraps was only big enough for a single cut and I needed a total of three full die cuts of each dp to complete the background.  Consequently, the left side of the card has more of the lighter dp in places where I would have used the darker dp if I'd had enough of it.  Sigh...

The image was cut with a QuicKutz die and layered onto the quilt.  I added a hand tied bow made from lace and wrapped with satin ribbon in the middle. 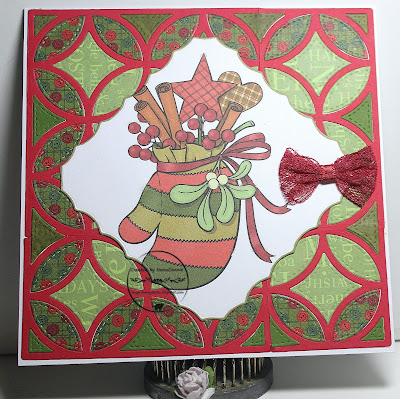 Challenges:
As You Like It
Christmas Kickstart
Crafty Creations
Creative Inspirations
Digi Choosday
Outlawz Festive Fri
TTCRD
We're getting close to the end of the 30 Days challenge and I still haven't done all the letters of the alphabet but I keep plugging away.  I'll get as many of them as possible before the daily challenges close including the 4 with no alphabetical letter to follow.  Beccy gives us the theme for those as we go along so it could be anything.
In view of playing catch up, I'll have a second post later today nd I hope you'll stop by to see that one, too.  :-D  Happy Crafting.  NanaConnie
Posted by NanaConnie at Tuesday, November 23, 2021

I used to love to quilt and recognized this pattern right off. Your card is very pretty. I remember the days when I didn't have enough of the right material. Oh, how aggravating. [Bunny]

This card is so beautiful. I have a quilt die but yours is way better.

Wow, I love your beautiful quilted pattern for your card design here Connie! That's the perfect image to go with it too! This is a fabulous way to get those Christmas papers out for use too! I'm cheering you on to complete your alphabet friend!

Beautiful! Love all the pattern and texture! Thanks for entering the Digi Choosday Challenge!! - Linh (DT)

Wow, what a beautiful background you've created NanaConnie, I love the quilt die! You chose fabulous papers for it too, all very festive. The little bow is a nice addition.
Cheers,
Beccy

Really gorgeous card Connie. Such a Christmassy flavour and so beautifully made too.

Oooooo, patchwork - how lovely! What a great way to use up those snippets. Thanks for playing at Christmas Kickstart, Jo x

What a wonderful use of die cuts. This is the only way I will ever quilt. Made my first this summer and it was fun, but so tedious. Thanks so much for joining us at AYLI challenge!

Darling Card!! Thanks for joining us at Digi Choosday with Polkadoodles! Candace DT