Each month I play in the progressive challenge at The Outlawz and this month the image (Claudia's Plant) was generously supplied by SheepSki Designs.  I added another SheepSki image, called Winter Deer, so that I could show a wintery scene through the window.

I colored with ProMarkers, then cut out the window frame with a die from Cottage Cutz.  The plant has been fussy cut and that was no easy chore.  :-D  When I added it to the card front, I glued only the pot and one leaf so there is some lovely dimension to the plant which shows so much more IRL than in the photo.  The two sentiment pieces were cut with dies from Avery Elle.  The background (card front) has been dry embossed with my 'Linen' EF.

Hours after I finished the card, I kept looking at it and wishing I had put the plant on a table instead of the floor but it's too late now.  Maybe next time.  In any case, it was  fun way to use a tropical plant on a winter Christmas card. 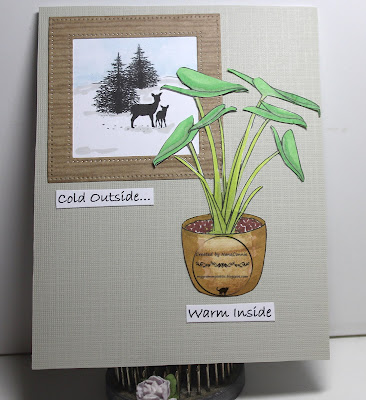 This is such a clever card design and I love your interpretation of this challenge! I think I would want to be inside while seeing those deer in the snow too!! Wonderful inspiration friend!

This is a very interesting project.
Thank you for your entry at Friendship Challenge.
Good luck and best wishes!
Ilse (thera)

A wonderful project Thank you for joining us at Ike's World Challenges. Good luck Ginny DT for
Ike'sWorld challenge
My Blog As I do Rodos

Excellent fussy cutting never easy when you are an island to remove and there are a few of those here, impressed. Love the overall design of your card as well I think many of us would like to have that as the scene outside our window. Thank you for sharing with us at Inspiration Station and Good Luck xx

Strange and interesting. I'm glad you shared at CCAYR.
Thanks so much for playing in CCAYR.

What a gorgeous card! Thanks for joining us at Die R Us!

Great design. Love it.
Thanks for playing along with us at our present challenge at Creative Crafting Uncles and good luck. Hope you will join us next challenge again.

Your creation is beautiful🥰! Thank you so much for your participation at Inspiration Station Challenge😃 Please come back soon😍!
Marci - DT

Lovely!! Thanks so much for participating in our CHRISTMAS CRAFTS ALL YEAR ROUND challenge!!! Can’t wait to see you participate again in our next challenge!! Have a happy crafting day!! Stay safe and healthy!!
*Sorry for being so late commenting but please know that I have checked out your project and appreciate you entering my challenge!!!
Deanne at A Little Bit O’ Paper