OK, another completely out-of-alphabetical-order card done for the 30 Days of Holidays at Beccy's Place.  I did this one for the letter "E" and it includes:  Elf, Eisa (name of this elf), Twisted Easel card, Embossing, & Embellishments.

The Eisa image was reversed before printing and then colored with ProMarkers and gel pens.  I cut the image with an oval die from QuicKutz.  I used a 'star' embossing folder on another oval, larger than the image but cut with another QuicKutz die.  I inked the edges of each oval before putting them together.

I chose to make the easel part of this card on the 'wrong' side but it was done deliberately.  I'm sending this card to my DIL and I tease her because she's left-handed so this card opens from the left instead of the traditional right side.  :-D

After scoring the easel fold, I added scraps of ribbon, then layered on the matted image piece.  I cut the sentiment, added two more layers to it, and used it and one snowflake embellishment as the 'stop' for the easel.  The bow was tied by hand and I added the other two snowflake embellies to the card front. 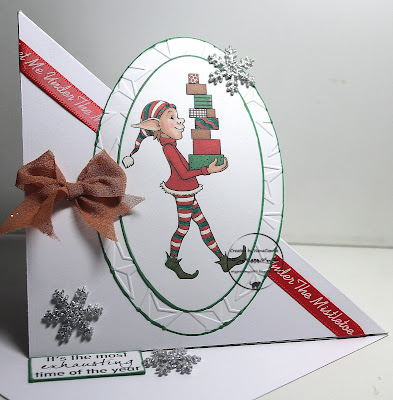 I love that you've created this card for your daughter-in-law NanaConnie, what a fabulous relationship the two of you have. The card looks wonderful, the snowflake embellishments and pretty ribbon bow are lovely.
Cheers,
Beccy

What a cute and amazing work! Like the shape, too!


Thanks for playing along with our Do-Al(l) Kreatives Challenge and good luck!

That's a great easel card with a lovely image on it.
Thanks for joining the challenge at Carlin's Kaartenparadijs.
Karin DT

Great card. Thanks for joining us at the DAK Challenge.
Greetings Andrea

A great card with the cute stamp from our sponsor Beccy's Place.
Thank you for joining us atCarlin's Kaartenparadijs.
Good Luck !
Carla (DT)

Just doing a bit of catching up. Love your card. Alison x

Connie this is a fabulous project. Love Eisa Elf. Great layout and coloring. Thank you for joining us over at Crafters Cafe. DT~Jana