It's the day for the letter "M" in the 30 Days of Holidays at Beccy's Place.  I've used one of her newest mice which I think is so adorable!  Although not made as a Christmas image, this darling Mouse is all dressed up in his winter scarf and by using Magenta Markers to color both the scarf and the flower, the image took on a Christmas-y color combo.  The image is colored with ProMarkers.  I also used tiny Metal brads, covered in glitter for a touch of sparkle.  (Secret - when you want to add glitter (or even  a particular color of embossing powder) to metal brads, hold the prongs with a pair of tweezers, heat the brad with a heat gun, and when it's hot, immediately dip it into the glitter EP !)

The image and its frame are cut with QuicKutz dies.  The magenta ribbon was wrapped around the card front and also used to tie the double loop bow.  The sentiment was cut with an Avery Elle die and matted with magenta CS. 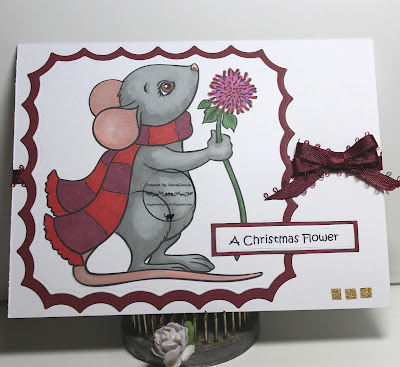 Challenges:
Allsorts
Cardz TV
Colour Crazy
Crafty Catz
Cutie Pie
Di's Digi Designs
Dragonfly Dreams
Outlawz PAM
Passion for Markers
I missed doing a post for yesterday's card (life got in the way as sometimes happens so I'll have a second post today.  In a way, that's better because the posts will be in 'alphabetical' order even though I made them in reverse order.  :-D  Happy Crafting.  NanaConnie
Posted by NanaConnie at Sunday, November 21, 2021

A really fun creation, many thanks for joining in this weeks Feminine theme at Allsorts challenge.

Such a cute image and lovely layout! Thanks for playing along with us at Passion for Markers this week, good luck! Juliexx

Cute mouse giving a pink flower to the recipient!
Thanks for sharing at Allsorts this week.
Sarn x

Super cute card. Thank you for sharing with us at Passion for Markers. Marlene

So very cute!! Thank you so much for sharing at Allsorts challenge!

A giving mouse and a nice touch of sparkle. So glad you shared with us at Incy Wincy, come back soon. CarolG

what a cute little mouse, wish I looked so good without clothes hehehehe, thank you for sharing at Crafty Catz challenge, Tilly

Adorable image and great card. Thanks for playing with us at Colour Crazy.

Lovely card NanaConnie. I am liking how you are adapting non-Christmas images for Christmas projects. Thank you for entering the Traditional Christmas Colours +/or Colour On Kraft Card Challenge at Incy Wincy Designs.

Super cute card…Thanks for joining us at the Cutie Pie Challenge:)
Wendy x