For the last several years, Beccy's Place has run a 30 Days of Holidays through out November with a new challenge each day.  Most of the challenges have alphabetical prompts but since there are only 26 letters in the English alphabet, there are an additional 4 days where Beccy gives a random theme to follow.  BTW, it's any holiday, not just Christmas but I use this month to catch up on my Christmas cards.

I've been part of that 30 Days challenge each year but this year I'm running behind with my posts due to an injury but I'll be posting my first two finished cards today.  Look for another post in about an hour or so.

This one is for the letter "B" and I've done Bah (Humbug), Blue, Black hat on the Button snowman, & Bells.  The image is ono of Beccy's and the expression on that goose's face clearly says, Bah, Humbug!  The papers are from Doodlebug and the gold ribbon is metallic and wired.  The sparkly snowman was a shank button and I cut off the shank. 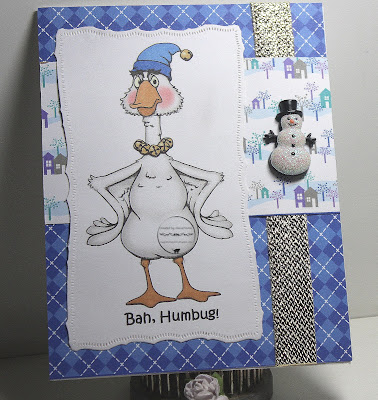 I used all the colors from board #469 at CMH Color Dare
EXCEPT Sage. 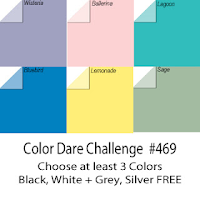 Challenges:
Cardz TV
Crafter's Castle
Crafty Calendar
Crafty Hazelnut's
Creative Fingers
Pattie's Creations
Polkadoodles
Winter Wonderland
I hope you'll stop by later to see my second post today.  I know things won't necessarily be in order but I'm posting them as I get them completed instead of waiting until I have each letter of the alphabet finished.  I'm still working on the aperture card for "A."  :-D
Happy Crafting.  NanaConnie
Posted by NanaConnie at Saturday, November 06, 2021

This humbug image is adorable and love the plaid background... fun card. Thanks for sharing with us at Color Dare.

I love the layout of this card, the cute winter papers are perfectly paired with this sweet goose image!

Nana, I love this. I love everything about it. I won a prize from Beccy and this is the digi I'm getting. I love it. [Bunny]

I'm sorry to hear about your injury NanaConnie, I hope you feel better very soon.
You've done a great job adding all the "B" elements to your card. I love the blue colour scheme, it's lovely and calm and works well with the image. The little snowman button is very cute, I like that he has a little of his own sparkle too.
Cheers,
Beccy

Hope you feel better soon and I love this image! made me smile and thanks for joining us at Crafty Calendar hugs Sue x

Gosh, this is cute! I love that critter and the sentiment. Thanks for sharing with us at Colour Dare :)

How cute, Connie! Great use of our challenge colors and I love the goose's rosy cheeks. Your choice of papers is perfect - love the Argyll design. Thank you for playing along with us at Color My Heart Color Dare #469.

Super cute! Love the goose with the plaid background! Thank you for joining us at Color Dare!

Too much nice the image and beautiful design for your card.
Thank you for choosing to join our Challenge at Polkadoodles.
Hope to see you again.
×Nunzia Dt.

Fun design. Thank you for joining in our challenge at the Polkadoodles Craft Challenge Janet DT.

LOL that is just sooooo cute!!! Thank you so much for entering our challenge at Crafter's Castle this month....good luck :)
Hugs... Janie
DT
Crafter's Castle
crafterscastle.blogspot.com