This is another of the stamped images snail-mailed to me by a friend after I lost my entire collection of digital images in a flash drive crash.  I'm not sure how she did the circle behind the wizard but it's a fantastic addition to the image.

I used water colors, ProMarkers, and added white gel pen to his beard and on the dragon smoke.  The image was cut with a Tonic Studios die and I inked the edges.  I first tried the image on a white card front but it just didn't give the nighttime look I wanted, so I swapped that out with black CS and thought it was perfect!

The sentiment was printed and cut by hand.  I wanted a completely simple card because it's intended for a male recipient who just isn't into fuss or frou-frou of any kind. 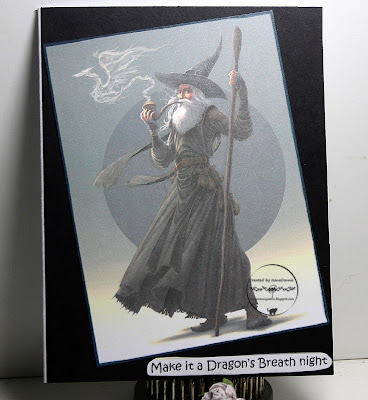 Many thanks for sharing this masculine card in our challenge at Allsorts this week.
Lorraine

Wow, what a very cool image! I love the "dragon smoke" and your details with the gel pen and your watercolor! So glad you're at least able to get some images to play with! Fabulous card!

Awesome wicked image! Love your spooky card. Thanks for sharing with us at Two Old Bats Halloween Challenge!

You've nailed the card for a male recipient, it looks wonderful. Thanks for sharing with us at Allsorts challenge.

What a fabulous card with this gorgeous image! So sorry you lost all your digis! I had a faulty flash drive some years ago and many of those digis are now only showing up partially and are useless. So frustrating!
Thanks so much for joining us at Allsorts challenge!

Nana Connie, that image is amazing!

This is really cool and your colouring is fantastic. Thanks so much for joining us this fortnight at Allsorts challenge.
Pauline xx

Hi there, that's a stunning image - I wouldn't mind it myself! - and a great card. Thanks for joining in with us again at Colour Crazy Challenge, Sarah - DT