It's time to start another challenge at QKR Stampede and the theme is always Anything Goes.

I was having a text conversation with a young teenager shortly before I started making this card and we were talking about the kinds of things people could accomplish in just 5 minutes.  Half way down her list, she said she could eat an apple in 5 minutes.  That triggered the sentiment on this card. lol

Both images are from our sister company, Eureka Stamps, and they are called "Apple" and "Apple Core" of course.  :-D  Most of the images from either QKR or Eureka are available in both rubber and digital, whichever your preference.  They are also amazingly priced without any need for sales.  Typically, digis run about $2 and rubber comes in at $3 to $3.50.

I printed the images together, but used a die from Cottage Cutz to cut them into rounded, stitched squares.  The sentiment was cut with an Avery Elle die.  I used ProMarkers to color the stems, leaves, and apple flesh on the core image.  The chevron dp was a scrap from the basket and I'm sure it originally came from a Recollections stack.  I know this is pretty CAS but once I had the images laid out on top of the scrap dp and put the sentiment on top of that, it just looked 'finished' so I adhered everything and left it without embellishment. 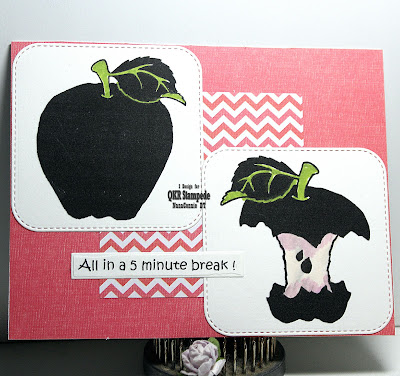 Challenges:
A Perfect Time ...
Carlin's Card Paradise
Classic Design
Crafts Galore Encore
Mirtillamente
Morgan's ArtWorld
Passion for Markers
TTCRD
I hope you're going to come and play with us this week.  Remember, it's Anything Goes and you can win delightful images from QKR Stampede!  See you there.  NanaConnie
Posted by NanaConnie at Monday, August 01, 2022

A fun card. Thanks for joining Passion for Markers. Elaine

Great fun card love the images and sentiment and you are right it is just perfect as is!
Thank you for joining us at TTCRD
Carol DT x

I love the story behind this fun card, and the images are fabulous. Such a great design! Thanks for sharing this with us at Passion for Markers!
Linda

This is fab! Love these images and the black is so striking against the pink! Love how a conversation can inspire a card! Thanks for sharing at Passion for Markers this week. Hugs, Karen x

Your card is very beautiful.
Thank you for joining us at Carlin's Kaartenparadijs challenge.

Great card you make. Thanks for joining the challenge of Morgans Artworld. Greetings Helma DT

Fabulous creation! Thank you for sharing with us over here at Morgan's Artworld Open Challenge and best of luck with your entry. Love to see you join in each month.
Judy DT for
http://morgansartworld.blogspot.com/