Trees in the Forest

Edited to add:  Beccy's Place threw me a curve giving us a non-alphabet letter prompt for today but I'd worked ahead on and pre-scheduled  my "T" card since it's Thanksgiving and I won't be posting until I'm back home.  I'll get caught up as soon as I can.

One more post with a card for the 30 Days of Holiday cards at Beccy's Place and the prompt is "T."  Trees is a pretty obvious choice but I chose this image from Beccy's with pine Trees in the forest instead of a decorated Tree in the house. 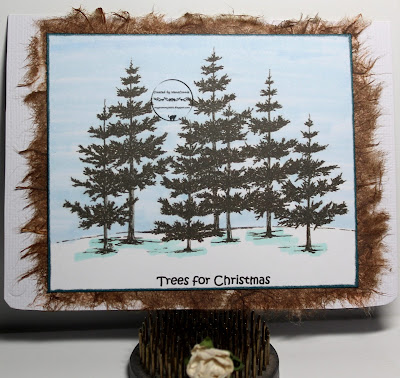 I admit I was heavily inspired by the color combo photo
which I found at House that Stamps Built.

I used ProMarkers to color the image, then cut it with a simple, rectangle die from Tonic Studios.  I added Teal ink to the edges of the cut piece.  The mulberry paper is called Teak Brown.  The Trees have a Tapered shape, adding yet another T !

That's all I have for today but I have two posts pre-scheduled for Friday; one for QKR Stampede and one for the next Beccy's Place daily challenge and the rather difficult letter "U."  I'm good so far at having been able to post each day of 30 days and it looks like I may get all the days in, even if I have to play catch up again after the weekend.  Happy Crafting.  NanaConnie
Posted by NanaConnie at Wednesday, November 21, 2018

Beautiful Xmas card love the design. Thanks for joining us at TPS, good luck with the challenge. hugs Shirleyxxxxx

What a wonderful and lovely scene you've created with those graceful trees! I love your coloring and the fibers behind the image in your photo! Wishing you a wonderful Thanksgiving wherever you are :)

Great use of mulberry paper NC, love the effect. I like the colour you added to the forest scene as well... certainly looks like a cold and frosty day! Lovely.
Cheers,
Beccy

Beautiful!! Those trees are just fabulous and I love the added softness of the mulberry paper (I use that technique quite a bit!). Thanks for playing with the House That Stamps Built.

This card is so pretty and I love the tree images used! Thank you for joining the Crafter’s Castle’s November Challenge! –Tasha ☺

I love those pretty pine trees! Thanks for linking this up to our Inspiration Board challenge over on THTSB!

Lovely!! Thanks so much for participating in our {PIN}SPIRATIONAL challenge. Hope you participate in our next challenge!! Have a happy crafty day!!!
Deanne at A Little Bit O’ Paper