Here's my post for the 'curve' Beccy's Place threw us on Thursday when she gave us a prompt of "CASE Yourself" instead of the letter "T" which I was expecting and had prepared ahead.  We have to take a previous card we have made and CASE it.

Here's the card I CASEd, one I did last year for the 30 Days of Christmas.  You can see the post HERE.  I used one of Beccy's freebies.

I decided on something really quick and printed out
a pre-colored version of one of her new Nutcrackers. 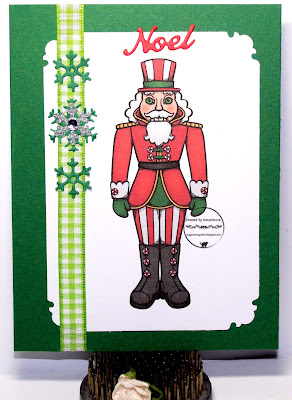 I also took my cue from the sketch
at Sketch Saturday. 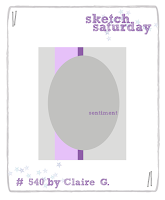 I decided to reverse the reds and greens from last year's card while still keeping the single character as the main focus.  I punched the corners of the image with another Fiskars corner punch, and began searching through my Christmas ribbons.  I was looking for that same plaid ribbon but it was not to be found.  I really love the one I did find and I think it goes well with the masculine Nutcracker image.

I used an Art Impressions die to cut the snowflakes, made the center one with 2 layers, and added glitter and a gem to the top snowflake.  The sentiment was cut with a Die-Versions die and it echos the sentiment from last year.

Cute! Love that giant Nutcracker image. I'm so glad that you joined in our challenge and shared your lovely work over on the Sketch Saturday blog. Good luck.
~Jo, SS-DT

I do love a curve ball NC, keeps everyone on their toes! You've done a fabulous job with your CASE card, the green version looks awesome. I love the layering of the snowflakes, particularly the silver sparkly one. Fabulous!
Cheers,
Beccy

What a great image, I like the slight changes you have made! So amazing it working with the sketch. Thanks for joining us at Sketch Saturday this week!

Beautiful card. Thank you for sharing with us over on dis digi designs challenge. Carol xx

Beautiful Christmas card Connie. Thank you for playing along with our Challenge at Digi Designs. We would love to see you again ... Anet DTx

Lovely christmas cards! Thank for playing with us at Di's Digi challenge this week.
Nathalie DT

Awesome job on the CASEing my friend! Love the snowflakes on your ribbon and your nutcracker is so fun and festive in this color scheme! :) HUGS

Thank you so much for entering the Twisted Thursdays Anything Goes challenge at The Outlawz Challenges last week. Looking forward to seeing you again in our next fun Anything Goes Challenge with optional twist.
Happy crafting,
Angela
Twisted Thursday DT
Taste Of Craftiness {My Blog}
theoutlawzchallenges.ning.com