It turns out that today (Day 5 of the 30 Days of Christmas) is one of the days when Beccy tosses us a theme instead of using a letter of the alphabet as a prompt.  The challenge colors are: custard, moss, cocoa, and bisque.

I read through the Day 5 post at Beccy's, then went back to bed for a while since this flu hasn't gone completely.  When I got up again, I did this CAS card using these two really cute stockings from Beccy's Place. 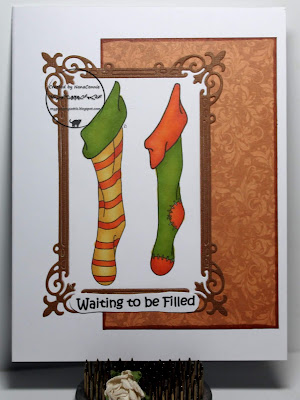 I based my design on the sketch from
The House that Stamps Built, but flipped side to side.

Last year during her 30 Days of Holiday Cards, Beccy gave us a tutorial on recoloring a pre-colored image and I decided to try it.  I chose this image of the two stockings because the original colors were as close to what I needed as possible.  I also adjusted the pre-coloring to make it as light as possible before I printed it, editing it with my Word software.

I used my ProMarkers to add a golden orange to the red, making it bisque, and turned the green darker and more mossy with a "Moss" Promarker.  The yellow in the striped stocking only needed the addition of a "Mustard" ProMarker to change it to the custard shade.

To get the "cocoa," I used a Bo Bunny die to cut the frame out of CS and I inset the image into it.  The background paper (also Bo Bunny) was a delightful bisque color and worked perfectly as a complementary background for the image.  Both of those went onto a white card base and, beyond that, I left it very CAS.

OK, that's it.  I'm going back for another nap and I'll see you tomorrow when, hopefully, I'll be feeling stronger and not need two naps in the same day.  :-D  Happy Crafting.  NanaConnie
Posted by NanaConnie at Monday, November 05, 2018

Hi Connie, I hope you are on the mend and feeling better. A fabulous card for the colour challenge, love the stockings. Thank you for sharing with us at Crafting By Design... good luck in the draw... Megan DT

It's a really lovely design and pretty colours, thanks so much for joinin in with our 'Get ready for Christmas' theme at Stamping Sensations challenge. Hope you soon shake that flu.

I do hope that you're feeling better soon. Your card has a great design and layout and is a great take on the sketch. Thank you for joining us in our 'Get Ready For Christmas' theme challenge at Stamping Sensations and good luck. Sandra x

You followed the color theme beautifully! Love the design here! Lovely Christmas card! I hope you get to feeling better very soon! Thanks for sharing it with us at Lil Patch of Crafty Friends!
Sandy DT

Absolutely fantastic NC, well done to you! I was very impressed to read that you had altered the colours with your promarkers to get the image exactly as you wanted. I love the sentiment, the ornate border and the background paper. Wonderful!
Cheers,
Beccy

This is very cute! That frame is fabulous and it frames the stocking perfectly!! Thanks for playing with The House That Stamps Built.

The stockings are so adorable Connie! Really love the colors on this design!! HUGS :)

Oh Nanaconnie, This layout is gorgeous and you have made such a gorgeous card with your stockings that shows the layout too.Thanks for playing at Incy Wincy Challenge Cheryl DT

Love those stockings, NC! Thanks for sharing your creativity at the PIP Challenge this week! Kudos from kReN. Join me at http://afourthlife.blogspot.com

That's a gorgeous take on the sketch. Love the stockings! Great colouring too. Thanks for sharing it with us at Stamping Sensations.

Love this project! so creative! Thanks so much for joining us this time at Incy Wincy Design. Francesca - http://cardescrap.blogspot.com