Playing in the Snow

I adore Magnolia Stamps' Tildas and all their various adventures.  Of the few companies whose rubber stamps I kept in my collection when I went digital, Magnolias were first and I must have close to 75 of them, collected over the years.  So, having shared that information with you, I'm ashamed to admit this particular stamp had never been inked before.  I've now corrected that neglect.  :-D 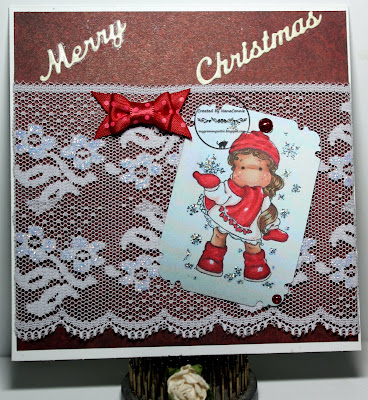 Nothing I say is going to do justice to the sparkle on this card.  The sparkle just doesn't show up no matter how I try to photograph it.  Sigh...

The image is colored with Copics and ProMarkers, then cut and corner-punched with a Fiskars punch.  I found a large scrap of lace, laid it across a piece of shimmery, deep red, dp and tucked the edges to the back where I adhered them with double-sided tape.  After the image was added, I used glue and glitter to the snowflakes in the image and on the flowers in the lace.

While the glitter was drying, I dug out some glittered CS and cut the "Merry Christmas" sentiment with a die from Die-Versions.  Unfortunately, I simply could not capture the sparkle on the sentiment but it's there.  I tied one of my favorite bow-tie bows using red, polka dot ribbon and added it.  My final touch was to add two, small, sparkly, Card Candi dots; one is on her hat and the other in the lower corner of the image piece.

I'll have a second post today for the Day 7 challenge at Beccy's Place if I have energy enough to sit at the computer long enough to draft another blog post.  :-D  Happy Crafting.  NanaConnie
Posted by NanaConnie at Wednesday, November 07, 2018

I think you have just the right amount of sparkle here - and what a ute snow "bunny" lol. Thanks so much for playing at TSOT!

Such a sweet image Connie!! Really love that gorgeous lace background with this and your sparkle is beautiful with it!! :) Thanks for sharing this beauty! HUGS

Thank you for sharing your cute glittery card with us at Try Stampin' on Tuesday, Connie! I had never thought about glittering lace - you have inspired me! -Donna

This card is totally cute, and definitely fits our Wrap Up Warm challenge at Christmas With The Cuties! Thanks for joining us! :)

What a sweet Christmas creation and perfect gliier and sparkle, many thanks for joining in with our 'Get ready for Christmas' theme at Stamping Sensations challange.

Your lovely image looks great against the lace background, lovely colours too. Thank you for joining us in our 'Get Ready For Christmas' theme challenge at Stamping Sensations and good luck. Sandra x

Such a pretty card. Love the lace.
DT - Susan

This is such a lovely card, and I can just imagine all the sparkle! Sometimes a picture just doesn't do an image justice. But this is beautiful, and I love the lace. Thank you so much for sharing this with us at PIP Challenges!

That lace is just the perfect touch on this beautiful card!

This is a beautiful card, the lace is gorgeous. Thank you for sharing with us at Dream Valley Challenge. Marlene

A lovely card and I like the addition of the lace. Thank you for joining in the Crafting FRom the Heart challenge this time.
Mary

Love the lace background and the traditional Christmas colours. Gorgeous card! Thanks for sharing it with us at Stamping Sensations.

Lovely card, thanks for joining us @ CWTC. Sue x

This is a beautiful Christmascard. Tilda is beautiful coloured and I love how you've used that lace. Great idea.
Thank you for joining the challenge at Addicted To Stamps Challengeblog.
Greetings Miranda (ATSC)