Today the theme at Beccy's Place, where I'm playing in the 30 Days of Holiday cards, is a BINGO board.  I've used the 3rd column:  Ice & Snow/ Ovals/ Kraft CS.

The little 'cardinal' (maybe he's an owl, but since I colored him red for Christmas, he's now a cardinal!) is one of Beccy's images and I did a take off on one of the sentiments that comes with this bird set. 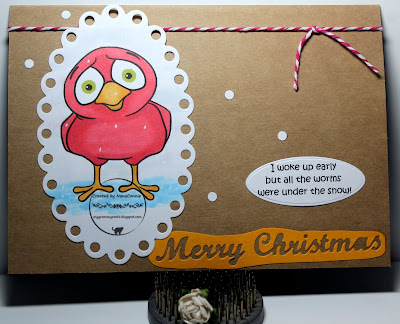 I wrapped baker's twine around the card front and tied it in a square knot.  I used a few of the dots which dropped out of the image die cut to symbolize snow falling from the sky.  The "Merry Christmas" is a negative piece from an Elizabeth Craft Designs die.  I've used that one a lot this holiday season and you'll see it a couple of more times this week on upcoming cards.  It just seems foolish to let those negatives go into the trash bin when they are so usable!  :-D

That's it for today.  Happy Crafting.  NanaConnie
Posted by NanaConnie at Sunday, November 11, 2018

You are so clever to use the negatives from the die. I have that set of birds too and he does look like a cardinal all colored in red. A very clever card.

He definitely looks like a cardinal to me NC, the bright red feathers give him away. I LOVE the way you've changed the sentiment to match your theme, very clever idea and a great way to extend your stamps.
Cheers,
Beccy

That birdie has such sweet eyes on him! Really sweet card and what a darling idea to make him a Cardinal for Christmas! We have them during the winter here and they really stand out on that white snow! :) HUGS

Great card!Love how you've used the negative die cut! Thanks for sharing with us at Crafty Hazelnuts Christmas Challenge.