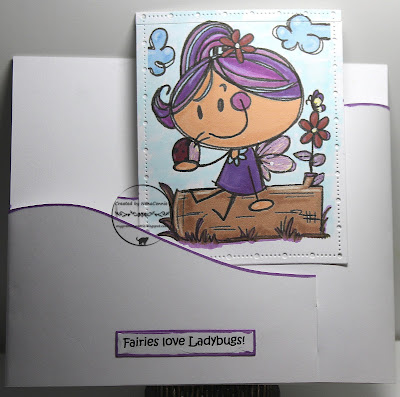 The cute image is from Bugaboo Stamps.  I used the color board #449 at Color Dare and chose blue and brown in addition to the required purple.  Note that the fairy's skin was colored with a 'Praline Brown' marker. 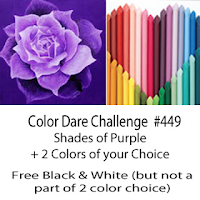 Challenges:
Aud Sentiments
Cardz TV
Catch the Bug
Crafty Sentiments
Cute Card Thurs
Digi Choosday
Double D
Lemon Shortbread
Marvelous Minis
That's it for today and probably for tomorrow, too, but I'll be back with a new post on Thursday so check back then.  Happy Crafting.  NanaConnie
Posted by NanaConnie at Tuesday, June 22, 2021

What a cute image and you have colored her beautifully.
A bendi card - I don't even know what that is!! I will have to Google.
Hugs Monica

Sweet fairy image and great coloring! Thanks for joining the Double D, "Signs of Summer" Challenge.

Love that cute fairy and love your coloring!! I need to do a bendi card. Thanks for the great inspiration.

Oh Connie this is just so adorable! Great coloring! Thanks so much for joining in the fun at our Double D ‘Signs of Summer’ challenge! Good Luck and we hope you’ll come back often.
Darlene
DOUBLE D Challenge Blog
DAR’S CRAFTY CREATIONS
Please stop in for a visit!

How sweet is that little girl sitting on the log? Love it! Thanks for sharing with us at Colour Dare :)

Never seen the bendi; but it looks interesting and clever for your little card... the image is adorable and great coloring for such a small image. Thanks for sharing with us at Color Dare.

Super cute image! Thank you for joining us at Color Dare!

I just made a Bendy card today, Connie! They seem so time-consuming but I always enjoy the results. Thank you for playing along with us at Color My Heart Color Dare Challenge #449.

Cute stamp and I like the border around it! Thanks for sharing with Color Dare!