If you visit my blog regularly or are a follower, you undoubtedly know that I love progressive challenges.  I found one that's new to me although it's not a new challenge.  I popped over to the online store at Cute as a Button, bought the image for this challenge (at half off), and sat down to make this card.  I could have gotten the image free simply by sending an email and requesting it but since it was on sale at half off, I did what I could to support the artist by buying it.  After all, I'll get the next one free.  :-D 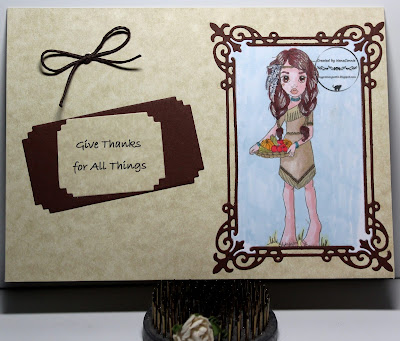 I colored the image with ProMarkers and cut it with a die from Bo Bunny.  The delicate frame is also cut with another die from that same set and that brown CS was simply a scrap from the basket on my craft table.  I layered the image and frame pieces onto marbled-beige CS and trimmed that to fit the card base.

I took a scrap of that trimmed off CS and printed the sentiment onto it, then die cut it (again, Bo Bunny die) but I had to cut more than once, moving the die each time to get the size I wanted since the die was much larger than the sentiment.  The brown CS behind the sentiment was the inside leftover from cutting the frame for the image but I cut that piece with the same die I used on the sentiment.  The cut piece shows you the actual size of the die, no adjustment made to the cut that time.

As a final touch on this otherwise CAS card, I tied a simple bow using brown jute cord and added it above the sentiment piece.

Last week's somewhat lower temperatures are already a thing of the past so we're still waiting on autumn here in my neck of the woods.  Weather predictors are saying we will be back to 100F either today or tomorrow and at 99F for the rest of the week, through and including the weekend.  Maybe this is just what we use to call "Indian Summer" back when I was a child.  I can hope, right?

Really darling image and very nicely presented here my friend! LOVE the colors and design for it too! HUGS

Great card Connie and so wonderfully coloured. Super image and design for Thanksgiving too.

Thanks for joining us at the Cute'n'Crafty Challenge.

Hi, NC! This reminds me of a "girl in the mirror" image. Love it. Thanks for joining us at the PIP Challenge. kReN@afourthlife

Beautiful project Nana Connie! We are very happy to have you with us at TTCRD.
Claudia Martins - DT

Great article..I am looking so forward to your blogcomment and
I love your page on your post.. That is so pretty..
หนังออนไลน์