This darling image from Hetty Clare is the free image given to us for the Progressive challenge at The Outlawz this month.  As soon as I saw the expression on this little ballerina's face, I knew what I had to use as the sentiment and here's the back story on that.
When my eldest granddaughter was still pre-school age, she fell in love with dancing and her mom enrolled her in ballet classes.  Because, at that time, we lived in different states (east Texas and northern California - not like you can drive over for a weekend!), my daughter took videos of her first performance so that I could see her perform.  When I visited at Christmas that year, we popped the video tape (yes, this was before everyone used their cell phones to photograph everything) into the machine and were watching it when my granddaughter came into the room, saw what we were watching, and said to me (in a tone of voice filled with the assurance of absolute knowledge), "It's called ballet."  :-D
I colored with ProMarkers, used a die from Spellbinders to cut it, matted it with pink CS, and fussy cut the mat to match the die cut.  The corner cut was also done with a Spellbinders die, but both the card front and pink CS were cut so that the die cut is inlaid into the card front.  I put a piece of white CS on the inside of the card front, then added glitter to the negative spaces of the corner cut.
The sentiment was printed and cut with an Avery Elle die.  The ribbon is from Really Reasonable Ribbon, as are the fabric flowers. 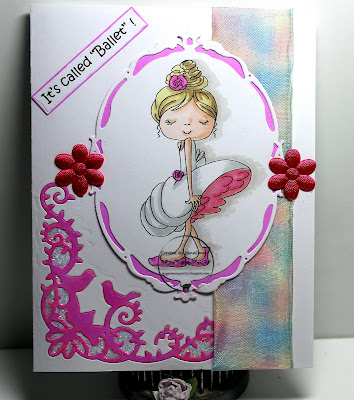 I based my card design on the sketch at Tues Morning Sketches
but I reversed it and used the corner die cut instead of the 2 strips.

Challenges:
Creations in Pink
Cute Card Thurs
I love ProMarkers
Lemon Shortbread
Lil Patch of ...
Star Stampz
Taylormadecards ...
What wonderful memories swirled in my head as I was making and posting this card.  Hard to believe it was nearly 20 years ago!  It seems like yesterday.  :-D
Happy Crafting.  NanaConnie
Posted by NanaConnie at Thursday, September 23, 2021

I LOVE the story and just see your granddaughter saying it as your little ballerina on your card is saying it. Just Gorgeous Connie. I love the corner die cut.
Faith x

And if it were easy, they'd call it football! My daughter did ballet for many many years. Such a sweet card. Thank you for joining us at Tuesday Morning Sketches.

Haha, what a cute story, and your card illustrates it perfectly! Great coloring too! Thanks for sharing with us at Lil Patch of Crafty Friends, and good luck! 😊

Oh what a brilliant story! I can imagine that the look on this ballerina's face matches the look you got that day too. Sweet card, Connie!
Hugs Monica

This is so adorable! Thank you for sharing with the Star Stampz Challenge!!