Well, we've gotten through the alphabet as far as the Letter J in the 30 Days of Christmas at Beccy's Place and now we have another "theme" card instead of an alphabet letter so polish up your thinking cap and find something new that you've never done before.  Beccy has such a great collection of tutorials and "how to"s on the blog that I went to that page of her blog and found a style called "Building Block" card.

It took me two practice tries before I completed this card, but I like the end result even though I modified it from a Z-fold to a regular A2.  Here are photos of both the card front and the inside when opened.  This also could count as the first "pop-up" of any kind that I've ever done!  It all folds flat for mailing. 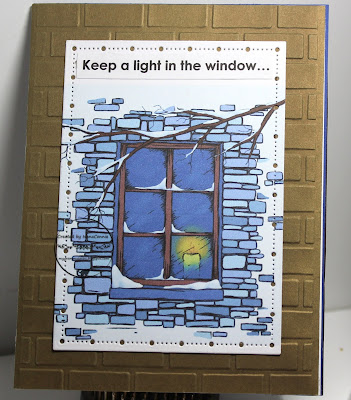 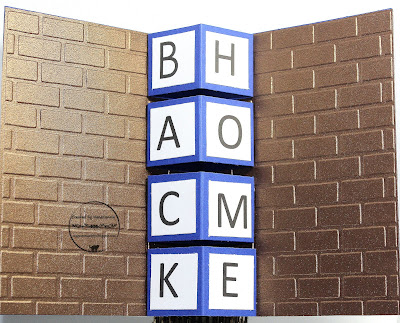 That turned out great! It is so much fun on Beccy's blog!

I love this sentiment NC, it's so beautiful. I once heard that it's traditional to keep a candle in the window so people can find their way home. What a lovely thought. The blue tones look gorgeous and contrast perfectly with the glowing yellow candle.
The brickwork embossing looks awesome and works perfectly with the building block fold. I love that you've altered it to fit your purposes, it looks great as an A2. Well done!!
Cheers,
Beccy

Beautiful card NanaConnie. I like the brick embossing too.

Connie, this is awesome! I used the same tutorial but did it just as Beccy wrote it. I usually make A2 cards so I'm going to have to try modify it because I'd love to do this again. Love your image and sentiment. Great job!

Wow Connie, this looks stunning with the coordinating brick texture and I love how you've done the interactive inside design! The blue tones are so pretty and I love the thought behind this design as well! Nicely done my friend! HUGS

You clever Gal, this is stunning Connie, love the window, then the inside topped it all.
Faith x

Love the shades of blue you've used and a wonderful pop up message inside. I have this set and should think of using it more often.

What a great card Connie!

Thank you for joining our challenge this week over at Creative Knockouts!

Your card with interactive design is wonderful Connie!
Thank you for sharing with us at Creative Knockouts! Hugs !! Bhavya DT.

Gorgeous card, I love the layout. Thanks for joining in our 'Anything Goes' challenge over at Crafty Calendar.
Hugs
Bev x