30 Days of Christmas at Beccy's Place

I'm a bit behind in getting started on cards for the 30 Days of Christmas at Beccy's Place this year but the crash of the thumb drive which held all of my digital images wiped out every image I had ever purchased or won from Beccy's Place.  I thought that meant I wouldn't be playing along this year and I've played every year since Beccy started doing this during the month of November, I think about 6 years ago.  But I've been gathering up Christmas images from the Freebies tab on Beccy's Blog and Beccy was kind enough to go back through my account at her store and send me Christmas images which had been lost on the crashed thumb drive.  Thank you so much, Beccy!

Each year, the letters of the alphabet are used as daily themes plus there are an additional 4 days which have random themes chosen by Beccy.  Today, I'll have 2 posts and this first one is for the letter "A."  I have the following things starting with the letter A:  A-frame card, A2 card, Alcohol ink markers, Arctic, plus the colors Alabaster, Almond, Amethyst, & Aqua.   The image is from Beccy's and is a Freebie on her website! 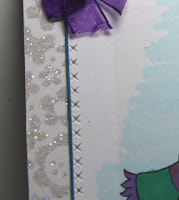 Challenges:
ABC Christmas
Arty Divas
Crafty Sentiments
Creative Inspirations
Digi Choosday
Digi Doodle Studios
Lemon Shortbread
SheepSki Designs
Word Art Weds
I'll be back in an hour or so with my second post for the day so be sure to come by again and check it out.  I don't know that I'm going to be able to do something for Beccy's every day this month as I have in past years, but I'll be here as often as I can.  In the meantime, Happy Crafting.  NanaConnie
Posted by NanaConnie at Wednesday, November 04, 2020

You're very welcome NC, it would have been sad not to see your beautiful cards in the challenge this year.
I love the glittery background on this one, it works perfectly with the sentiment! The sparkle definitely makes me think of frost and ice. I love the way you've coloured the snowman, the blue around his body and the outside is a wonderful effect. The cross-stitched border is awesome too!
Cheers,
Beccy

Great sentiment NanaConnie - the snowmen are probably the only ones that love the cold! I like the shadow around the snowman. Glad you could join in this month as well. I'm trying to visit every one else's entries to get some inspiration and comment on those that don't need sign-in. I'm looking forward to seeing what else you come up with for the challenges.

AWESOME card Connie, love your colouring, and the sparkle is gorgeous with him, making it frosty and beautiful.
Faith x

Beautiful card! Love the cute snowman and your wonderful colouring. Thank you for sharing with us at Creative Inspirations, good luck.
Hugs
Gina xx

Lovely card. Thanks you for joining with us at Digi Choosday Crafting Challenge. Good luck with your entry
Maritza DT

The pretty embossed background provides a perfect backdrop for your cute snowman. Such a lovely festive card!
Thanks for sharing with us at ABC Christmas Challenges.

What a pretty card. Love the sparkly paper. Thanks for playing along with us at Arty Divas.