Upright Nutcracker Soldiers in their Uniforms

I know you are all thinking that I copied Beccy's idea for the Letter "U" prompt in this year's 30 Days of Christmas but this quick and easy card was made before she posted her Nutcracker card.  I acknowledge that I chose them mostly because of their Uniforms but then realized I could add Upright because they were standing so straight and tall.

The image is one of Beccy's pre-colored images, trimmed into a rectangle, and cut with a Fiskar's corner punch.  The glittery red stripe was made with scraps and the sentiment is hand-trimmed on the corners.  The red CS front was embossed with my 'Linen' EF. 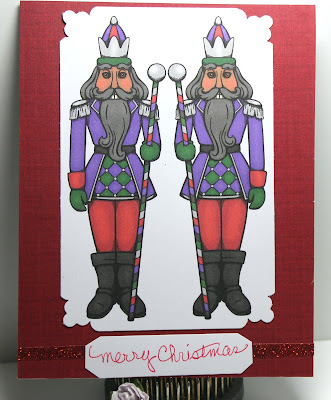 Posted by NanaConnie at Thursday, November 26, 2020

Fabulous Christmas card for a boy NanaConnie,love it

Lovely card NanaConnie. I like that you added a flipped image so that the Nutcrackers have each other for company.

There aren't too many "U" words that are suitable for holiday cards NC, so I don't think you and I will be the only ones who choose "uniform"... it's a tough one. Love the shaped corners you added to the image panel, they almost reflect the tops of the nutcrackers hats. The glitter strip is fabulous and adds the perfect amount of sparkle. Love it!
Cheers,
Beccy

Fabulous card Thank you for entering our Anything Goes Challenge atThrough The Craft Room Door this week. Looking forward to see you again next challenge. Good luck Ginny
My Blog As I do Rodos

What a brilliant Christmas card,

Thanks for playing along at Aud Sentiments,

I love your fun card! Toy soldiers are one of my favorite Christmas decorations! Thank you for joining our challenge at Digi Choosday . I hope you come back for the next one!
Hugs, Joy
JoyWilsonInk
Polkadoodles DT

Those nutcrackers are such festive images, and bring back memories of The Nutcracker ballet and music. Thanks so much for playing along at Time Out.

What a strong card! Love the colours! Thank you for joining us at TIME OUT!

The colors on those nutcrackers is just perfect! I love them and how you've finished out this design my friend! HUGS