We're getting so close to the end of the Month of Holiday Cards at Beccy's Place and I can now say for sure that I've done each day with an alphabet letter as the theme and there should be only two additional days of as-yet-unknown themes.  I'm beginning to think that I'll be able to complete cards for each of the 30 days.  :-D  Considering that I missed last year altogether, that's pretty exciting.  Even more exciting is the fact that with the exception of the very first day, I've used images from Beccy's Place for every card!

Today is the letter "Y" and it's an easier choice than yesterday's "X" but still not as easy as some of  the other letters.  I went with Yuletide.  I started out looking for a Yule Log but fell in love with this image from Beccy's, bought it, and did a Yuletide Blessings sentiment instead. 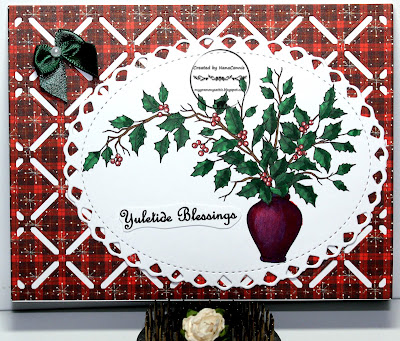 I stared with the color inspiration from House of Cards. 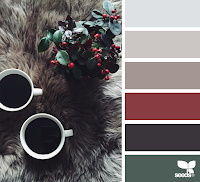 The image is colored with ProMarkers, and I added tiny dots of white gel ink to the berries as light reflection.  I used an Unbranded die to cut the image.  There was a scrap of that snowflake plaid paper left on the desk after using it for another project a day or two before but it had a couple of small tears in it.  I dug through my dies and found the one from Memory Box which cut out the 2 tears perfectly!  It also added some really great texture to the card.

I decided that the only things I'd add as embellishment was one, tiny bow so I took a white satin bow I had already sewn together and 'dyed' it with one of my green ProMarkers.

That's all I have for today but do check back tomorrow for the next in the series.  :-D  Happy Crafting.  NanaConnie
Posted by NanaConnie at Monday, November 27, 2017

What a lovely card Connie. So traditional with Christmas colours and of course plaid and holly! I really love it :)

What a fun card, Nana Connie! Love the background die that hides those tears. And the die you used to cut your image is neat too. Too many dies out there and not enough time and money. LOL! Great image and your leaves match that bow perfectly. Well done!

Oh, I love this NC, it's just beautiful. The colours are deep and rich and perfect for Christmas. The tartan paper is wonderful and I like that you've kept the embellishments to a minimum.
You've done a fabulous job keeping up with the challenge every day this month, your card stash must be looking very healthy. Well done!
Cheers,
Beccy

Beautiful card. I love that image. Thanks for playing along with us at PIP Challenges.

Wow ! Wonderful card!! I love it....Wish you good luck
Thanks for playing with us at Lemon Shortbread Challenge.
Love & Hugs
DT Veana R.

This is such a gorgeous card! I love the colors too.

I love any kind of holly image, too, Connie, and really love your Yuletide design with it! Congratulations on the great accomplishment!! Hugs, Darnell

Love your project! Thanks for joining us at the PIP Challenge this week! kReN@afourthlife

Hi Connie, a really gorgeous card.
I love the colours and beautful coulouring. Well done also in your win from the snippets playground so thrilled for you!
Hugs Shaz in Oz.x