Baby, It's Cold Outside

Another day of participating in the 30 Days of Holidays at Beccy's Place and the alphabet letter today is "C."  I decided that a good Cold snowman would be perfect so used one of Beccy's wonderful snowmen. 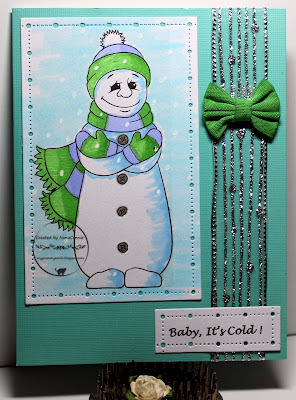 I colored with Copics (the blues) and ProMarkers (the greens), then die cut the image with a Gina Marie die.  The die in the set was wider than I needed so I did two cuts, adjusting the placement of the die to where I needed it for the second cut.  I did the same thing with the sentiment, using a smaller die from that same Gina Marie set.

I fully intended to make this a really CAS (another "C"!) design, using only the image and the sentiment.  But that gorgeous, sparkly ribbon was lying on my crafting desk, begging to be used, and the silver color added to the "cold" idea so I added a strip of it.  Then it seemed to need a bow so I tied a variation of my standard bow tie bows.  But the only ribbon I had was white so I used a ProMarker to 'dye' it green.

I resisted any further embellishment so I guess it's still a bit CAS compared to others I do with lots of flowers or die cut embellies.  At least there's lots of open space left, even if it's turquoise instead of white.  But I started with a colored card base so there never would have been any "white" space, regardless.  :-D

OK, I think three posts in one day is probably enough and I promise, while there may be other days this month with 2 posts, I think this is the last 3-post-day!  Happy Crafting.  NanaConnie
Posted by NanaConnie at Friday, November 03, 2017

Love your color combination on this card! That snowman is so cute!

I can understand why you needed to use the ribbon NC, it's beautiful. It reminds me of icicles or falling snow, so it fits perfectly with your theme. You did a wonderful job colouring the image, I love the blue and green combination. Fabulous!
Cheers,
Beccy

ooooooh, Connie! Look at how amazing our colors and shading are! I love the snowy storm happening in the background, too - perfect for the way your little snow guy appears to be shivering! Lovely ribbon, too, with a fantastic coordinating green bow. I have missed you this week, my friend! xx

Fabulous card Connie, love the die you used (envy) and the colours are wonderful. Fab bow too!
hugs
Glenda

This card really has a cold look to it, great colouring x

What an adorable snowman, love the smile. Well done. Thanks for joining us at ‘Do-Al(l) Creatives’. Jonnece DT

Thanks for playing along with our Do-Al(l) Kreatives Challenge and good luck!

Thanks for sharing with us at Creatalicious. Do come back again and good luck. Jackie DT member xx

A wonderful card!
Thank you soo much for taking part in our "anything goes with optional use blue & silver” challenge over at Creatalicious & good luck in the draw.
Hope to see you again in our new challenge as well…

That is one cold looking snowman. Your clever use of purple and blue makes him looks extra chilly. hugs, Teresa

great card! Thank you for sharing with us at Creatalicious Challenge. Hope to see you again.
Hugs, JIll DT

Funny image. Your colour combo is great! Thanks for making me smile!

Thanks for playing along with us at our present challenge at Do-Al(l) Kreatives and good luck! Hope you will join us next month again.

Super Christmas card, Connie. You coloured the snowman beautifully and I love the die you chose. Terrific colour combination! Thank you for sharing your project with us at the Crafts Galore Encore November Challenge, “Anything Goes”. Good Luck and hope to see you again next month!
Carole x DT
Craftilicious Creations

A wonderful card.
Thanks for joining us at the DAK Challenge.
Greetings Andrea

What a cute snowman. Love your card. So glad you have joined us at Craft-Dee BowZ in our monthly challenge. We look forward in having you join us again. Kathy, DT