Here we are with another "Anything Goes" challenge starting over at QKR Stampede.  It will run through October 31, and remember, we have two winners from each challenge; one using a QKR Stampede image (or our sister company, Eureka Stamps) and the other using any company's image.  Both of those winners are random draw winners.

Who doesn't think about the World Series of Baseball in October?  Ok, you're correct, people who don't live in the USA probably don't care about it one way or the other, and even in the US, those folks who are into football or basketball instead of baseball, probably don't care much.  But my youngest grandson, who recently turned 16 and plays on his high school baseball team, cares a great deal.  I made this card just for him since he thinks baseball is the answer to everything!

The image is from our sister company, Eureka Stamps, and I used watercolors to color the image in his school colors of crimson and gold.  The image and both frames were cut with QuicKutz dies.  Both frames were embossed with my "Linen" EF, and all three layers were mounted on a white A2 card base.  The sentiment was printed and cut with an Avery Elle die, then framed with a tiny scrap of red CS.

I kept it very CAS without any embellishments because it's a masculine card. 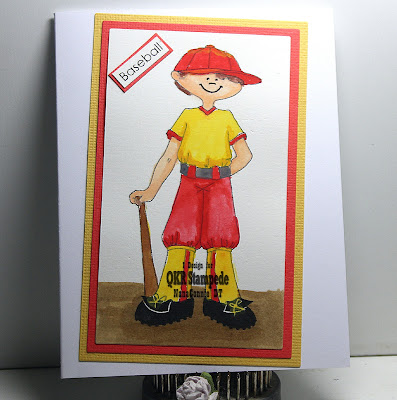 Challenges:
Ally's Angels
A Perfect Time ...
Die Cut Divas
Gem of a Challenge
Happy Li'l Stampers
LeAnn's World
Let's Craft and ...
Morgan's ArtWorld
World Wide Open
I hope we're going to see you playing along in our challenge.  We love being inspired by you.  Happy Crafting.  NanaConnie
Posted by NanaConnie at Saturday, October 15, 2022

Cute and sweet card. Thank you for sharing in our challenge at Classic Design Challenge we really appreciate you joining in.

Connie, what an adorable card. I'm sure your grandson will love it. Love that image and your watercoloring is great!! Thank you for sharing with us over at World Wide Open Design Team Challenge.
Barbara DT

What a charmer!!! You've made a terrific cheerful card! Thanks for sharing the cuteness at Ally's Angels for October's challenge! --Becca/DT