The theme at Catch the Bug this week is "Make a Splash."   While my first thought was a card with either ocean or swimming pool images, as I was watering my garden in the heat of the evening  (wishing we had rain instead of 100F+ daytime temperatures), I decided that perhaps a salute to the rain gods might help.  :-D 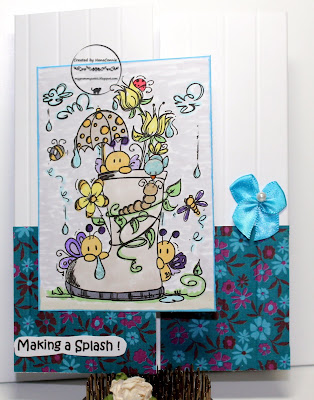 I started with the sketch from Stella Says Sketch
adapted for a gate fold.

As I was coloring this adorable Bugaboo Stamps image with ProMarkers, I thought it would be fun to do a gate fold card since I hadn't done one in who-knows-how-long!  I added a bit of sparkle gel ink to the raindrops which you might be able to see if you enlarge the photo.  I used a die from Spellbinders to cut the image, then inked the edges with a ProMarker.

I made the gate fold and added more score lines to each side for a bit of texture and visual interest.  The dp was in my scrap basket and I trimmed each scrap to size for the front of the card.  I printed the sentiment onto a scrap of white CS, then hand cut it before adding it.

The final touch was one of my hand-sewn, signature bows, and I dyed it with the same ProMarker as I had used to ink the edges of the image.

Tomorrow's upcoming attractions include my DT cards for both World Wide DT Open and QKR Stampede.  Hope you'll be stopping by to check them out.  Happy Crafting.  NanaConnie
Posted by NanaConnie at Thursday, June 14, 2018

What a great image, a gorgeous card.xxx

Great idea about saluting the rain gods. Love your cute and fun card that does just that too. FUN image! We're praying for rain about here and they keep saying we could get a few drops this weekend maybe. Hope they're right!
Lynn

That image is just as cute as a...well...BUG!! :) Your coloring is wonderful and I love your gatefold design too!! Your rocked the sketch with it along with your bow!! Beautifully done my friend! HUGS

The Gods must hear you with this card, LOVE it. fun and pretty too.
I hope the rain Gods heard you, we were lucky to have rain overnight, and another beautiful day here. Such a nice change LOL.
Faith
x

A really super image and so pretty in all the soft pastels, thank you so much for sharing it with us at Stamping Sensations June challenge.

This is so cute and I love your colour scheme. Thanks for joining us at Stamping Sensations.
Pinky

This is such an adorable image! I love the boot filled with all the crawling critters!

Great card, and great take on the challenge. Thanks for joining us at Catch the Bug.

A lovely card and I like how you’ve echoed the blue rain in your background colours. Thank you for sharing this with us at Stamping Sensations and good luck. Sandra x

Love these color choices. The embossed lines add a great detail and the paper is so striking.

Thank you for joining us at Li’l Patch of Crafty Friends for our challenge.

Lovely card - that bug image is such fun. Elizabeth x

Such a fun card - great colouring and a super image as well. Hope you get the rain you need!

Cute fun card....I hope it brought you some rain or cooler tamps! Thank you so much for entering our challenge at Crafter's Castle this month....good luck :)
Hugs... Janie
DT
Crafter's Castle
crafterscastle.blogspot.com

Your card is adorable. Love the bright colors. Thanks for joining in the Stella Says Sketch challenge, Lisa Lynn DT.