I needed a birthday card for a gal who loves blue and is an industrial designer.  That's all I know about her since this is a commission card.  I had trouble deciding between flowers or some cute animal.  I prefer to use animals more than flowers because they seem warmer and more animated but this time, I had no idea what animals this gal might like, if any at all.

This image seemed like a good compromise between fauna and flora.  I thought the butterflies and the flowers made it a bit feminine and the hexagon shapes added a modern industrial flair. 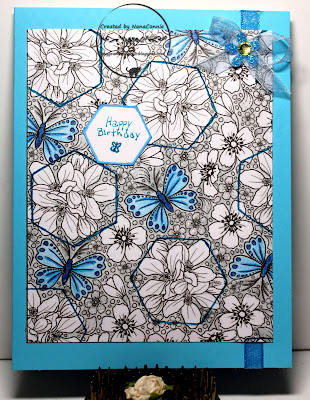 I based my card on the sketch from Sketch Saturday. 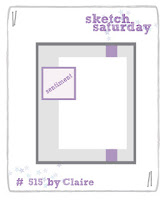 I started with an image (actually it's a coloring page which I reduced to size) from Delicious Doodles, colored with pencils and ProMarkers.  I printed and sized the image twice, gave both a light, gray scale background, then used a hexagon die from QuicKutz to cut the poppies from one of the images.

I inked the edges of each hexagon and layered it onto the same spots on the original image.  That gave it both texture and dimension but lining up the flower petals exactly took more time than cutting the shapes!  :-D

I cut the sentiment with another, smaller, hexagon die from that same set, inked the edges with a lighter ProMarker, and added it to the image.  I used three layers of sheer, blue, ribbon to wrap the card front, then tied a small bow with a single layer of the same ribbon.  I added a glittered flower to the center.

The design is flat and simple enough to mail easily but has enough visual interest to feel 'fancy.'

Today we crest the hill to the weekend and then it's an easy downhill to Friday night.  Hooray!   Happy Crafting.  NanaConnie
Posted by NanaConnie at Wednesday, May 30, 2018

Connie, this is super fantastic!!!! So different and yet so very pretty. I love everything about this one.
Lynn

Such a pretty card, love those blue butterflies!

A brilliant design. Thanks for joining AYLI challenge. Elaine

Really lovely creation and a very clever design, super shades of blue too.
Thank you for joining our 'Insects' challenge this week at Allsorts.

Oh my this is really beautiful Connie! Love the spotlighting on the design as well as the monochromatic effect!! :) HUGS

I would have thought this is perfect for an industrial designer, you have design and floral, LOVE it.
Faith
x

Thanks for entering our challenge at Allsorts Tracy x

Hi and welcome to our Challenge this month.Thank you for sharing your project with us good luck with your entry hope to see you again soon hugs Sue DT xx

I'm sure this card was well received. Your patience in lining up the hexagons exactly has paid off. Thankyou for coming and spinning the butterfly wheel with me this week. Hugs Mrs A.

Great card, Connie! Thanks for joining us at The Sisterhood of Crafters Challenge. Marsha DT