In our extended family we're all looking forward to the birth of new baby.  The really special part of this one is that, after a long line of three big sisters, this one is a boy!  Of course, he'll be treated like royalty.  I had the honor of designing and making invitations for the baby shower coming up later this month. 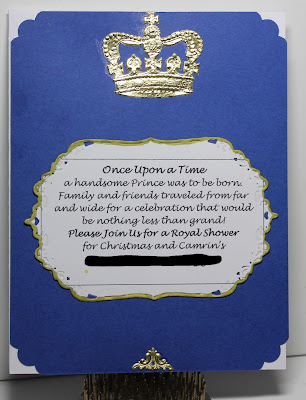 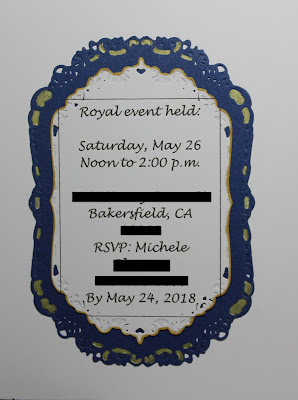 I started on these after being influenced
by the blue (for a boy) and gold (for a prince) colors in the
inspiration photo at Color Sisters. 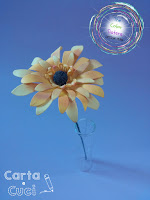 I can't believe how long it has taken me to get these made.  Typing up the text and choosing the font was the easiest part.  Laying those out onto a sheet of cardstock so that I could use dies to cut them individually took a little thinking and fussing about but I got it.

For the front, I used a Fiskar's corner punch on the royal blue CS and mounted that onto the white card base.  The text was printed on white CS, die cut with a die from Spellbinders, and then I used a gold ProMarker to ink the edge.  The crown and the decorative gold triangle at the bottom were added to enhance the 'little prince' theme.  I used dimensional dots to ad those and they give some great dimension to the front.

On the inside, I cut the blue CS with another Spellbinders' die, then used the first die to cut the text pieces, layering them together on the inside.  After cutting all of those pieces by hand (I made 30 of these!), I inked the edges and added gold paint to some of the embossed areas on the blue CS.

Although they look fairly CAS in design and layout, each invitation took almost 2 hours to complete.  Then there's all the addressing and stamping of the envelopes.  A time consuming project but fun to do and well worth it.

Thanks for visiting and Happy Crafting.  NanaConnie
Posted by NanaConnie at Tuesday, May 08, 2018

All I can say is Bless Your Heart! I made invites for a bridal shower several years ago and they really are a lot of work - and mine weren't any where as close to be this fabulous! Of course you know me and I love the blue but they're so different and cute for a baby shower. LOVE THESE!!!! Congrats to the couple on the upcoming baby too.
Lynn

WOW! Lots of love and work poured into these beautiful invitations, Connie! Love the royal aspect. Congratulations on your new family addition! XXOO

What a beautiful invitation for a very special prince to be!!

Beautiful creation!
Thanks so much for joining us at The Color Sisters Challenge 😘
Hope to see you again!
(Sabrina - TCS)