Everybody loves a good Halloween party but have you ever thought about whether witches party on Halloween?  What kind of costumes do they wear?  Do they put on human people masks?   Well, here's a sneak peek into at least 1 witch celebrating. 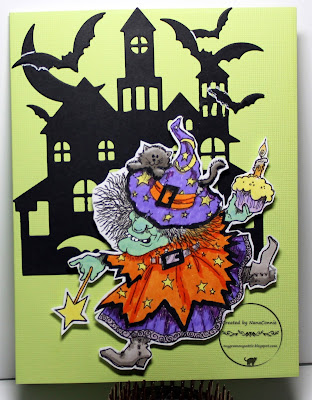 I started with the color combo at Outlawz Color.

The witch image is by Rick St. Dennis and I colored her with my ProMarkers, then fussy cut her with some very sharp scissors to get really clean cutting lines.  The haunted house is die cut with an Unbranded die (new to me as of yesterday.)

The house is adhered flat onto the card front and the witch is mounted on Pop Dots for some dimension.  Two of the bats in the sky have texture because I cut the house three times, took bats from those cuts and added them as layers to two of the bats here.  It doesn't show up in the photo, but IRL it's both visible and "feel"-able.

It's almost the weekend and I'm so ready!  I've been retired long enough that the idea of getting up every morning and heading off for an 8 hour day, day after day and week after week, is totally foreign and leaves me feeling exhausted.  I'll be so glad when everything is back to my normal routine which often includes an afternoon nap. lol

Such fun and charming halloween card. Love the smashing die cut! Thanks for joining us over at PFP this week.
Love n hugs
Marie

Your witch is enjoying herself utterly and completely! I love her dancing feet and the cute cupcake. It is your color choices that really have me smitten! Your fussy cutting is impeccable, especially the white halo around her so that the colors show off against the background. LOVE LOVE LOVE your spooky, bat-filled haunted house in the background. hugs, de

Super cute!!! Thank you for joining us at PINspirational, good luck!!! Amy DT

BRAVO!
Thank you for coming to play at IKEsWORLD Challenges.
/ I miss you in DT!/
Good luck!

LOVE everything about this card, the colouring the fab image, the house and the bats, Fabulous. I wish we we "did" Halloween across the pond in the same fashion you do.
Faith
x

The colours on that witch have captured my heart. It is truly amaizng. Thank you for taking the time to join in with our challenge and sharing your creativity with us, I love to see your talent, creativity and imagination at work. I hope to see more of your creativity in the near future. Love 'n' hugs Sall IkesWorld Challenges DT

Cute card!!! Thanks so much for participating in our {PIN}SPIRATIONAL challenge. Hope you participate in our next challenge!! Have a happy crafty day!!! *If this comment is late I apologize! I’m having major issues lately trying to leave comments due to the stupid ROBOT silliness!!!
Deanne at A Little Bit O’ Paper

Ah this is brilliant, what a cheery witch!!! Thanks for sharing with us on Passion for Promarkers this week, Hazel xx

My grand daughter would love her outfit! A nap in the afternoon is always good x

Great card. I love this image. It would be fun for a Halloween birthday. So happy you joined the Spooktacular Challenge at Tuesday Throwdown this week. Good luck, my friend. Hugs, Debi DT

Fabulous Halloween card, love the beautifully coloured witch against the die cut house! Great to have you playing along with us at Passion for Promarkers this week, love Jacky x

Wow ! Your witch is INCREDIBLE! Great Halloween card!
Thanks for playing with us at Lemon Shortbread Challenge.
Love & Hugs
DT Veana R.

Stunning colouring Nana Connie, fabulous Halloween creation :) :) :) Thank you so much for joining us for out 100th challenge at IKEsWORLD :) :) Hugs Mimi DT

thanks for entering the Sparkle and glitter challenge, love your card , very cute