Today I have another Christmas card with a delightful snowman on it but it's one of those a friend stamped and mailed to me without telling me who made the stamp.  If anyone recognizes it and can tell me, I'd love to edit this post and give full credit to the artist.  :-D 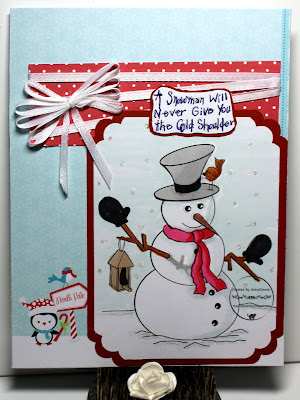 I colored the snowman and little bird with my ProMarkers, trying something a bit different this time in that I wanted the sun to be shining from behind and slightly to the left of the snowman. For some reason, I tend to put my light source to the direct left or right (or off center to the front left or right) on most of the things I color.

The reason I had to do it differently this time is because I dropped my gray ProMarker as I was coloring his top hat and it put a small gray smudge midway between his arm and his scarf.  While it was small, it was large enough to see and there was no way to cover it with an embellishment.  So, I added a shadow from his arm and worked on the rest of the image to add shading as if the sunlight was behind him and to his left.  Did it work?  I'm not really certain because all I can see is the mistake.  :-D

I found a scrap of red and white, polka dot, CS, wrapped it with very narrow white ribbon, and then made the bow with the help of my Zutter Bow It All.  The card base was pre-printed and the little penguin with the North Pole sign is on the card front, not stamped by me.   I die cut and matted my image, then went back and added some snowflakes to the background using a glitter gel pen.  Because I wanted the little penguin to show, I adjusted the placement of my image over to the very edge of the card so the penguin not be covered.

The sentiment is from QKR Stampede.

Great "save" and I love the look of the shadow! Cute image and a fun card. Love that ribbon treatment too.
Have a good weekend.

Another GREAT card, good thinking about the shadow, Yes! it looks good. Love the ribbon and the paper. Love how you have adapted the card to suit your need. AND the sentiment is Super.
Faith
x

Really cute card and snowman. Thank you so much for participating this week at the Mod Squad Challenge

Great card, Connie! I had to look long and hard to find your booboo and finally saw a very faint line, but if you had not mentioned it, I would never have seen it. I love pointing out my booboos, and am glad you do, too. Your sentiment, as always, is brrrrr-ific! Wonderful card design and colors, too. Hugs, de

I can't tell you who the artist is, but your card is wonderful. I especially like the piece with the ribbon. Great job. hugs, Teresa

Great design. Thank you for joining us at the Colour Crazy Challenge week 43 Helen DT