I think I've finished my Halloween cards for this year, unless I get a request from someone, and now I can totally concentrate on Thanksgiving and Christmas.  My Christmas stash is coming along quite well; I have probably half of what I'll need done and ready.

Each year, I make about 25 for family and friends, then another 50 to75 which I donate to a local Senior Center.  I've been doing that for the last 7 years.  The first year, I took maybe a dozen or so Christmas cards which were extras I had made and dropped them off at the center, asking only that they be offered to those seniors who were least able to get out to purchase cards for their grandkids/family.  The following year, I got a phone call from one of the center's volunteers, asking me if I was going to have extras to donate again that year.  The cards were popular enough that the seniors were hoping there would be some available.

I scrambled around, made as many as I could, and promised myself (and the Center) that I'd have cards for the following year.  Each year the number of cards I have for them has grown and last year I managed to donate 70 cards.  Not a single one went unused.  :-D

This card was made with one new die, one old die, two embossing folders, and it's all scrap bits of this and that. 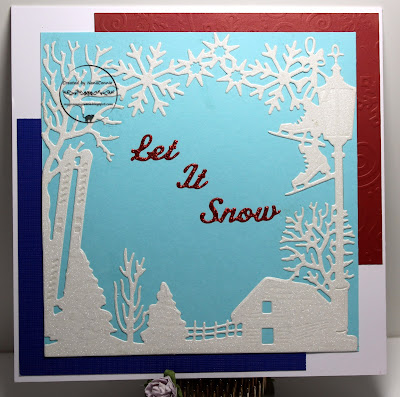 That's it for today. With any luck, I'll be able to post again tomorrow so be sure to stop by.  Happy Crafting.  NanaConnie

How thoughtful of you to donate your cards,A beautiful card love the diecut scene

This is such a beautiful design Connie! I love the silhouette die with the glitter paper! You're so good about getting your projects done ahead! I'm still trying to figure out how to squeeze in Halloween! LOL!! Good for you on donating so many cards every year! I'm sure it's very much appreciated!

Wonderful Christmas card. Thanks for joining us at the CHNC Christmas Weekly this week for our "Anything Goes, optional " sentiment as the focal point" challenge.

Awesome card and dies. So glad you shared over at Crafty Catz.

Such effective use of the die and colours, many thanks for sharing and joining in this weeks Allsorts challenge.

Great card Connie, love the die and the design. I have at least 75 to make for family and friends! Although I have made a good start, I should count to make sure LOL.
Faith x

This is gorgeous and what a wonderful idea. Wouldn't that be a terrific community project to do with a group of friends or neighbours?
Blessings,
Teresa

Gorgeous card Connie - and why am I not surprised that you have such a wonderful heart. It will mean so much to people to be able to send out hand made cards - a lovely idea.

Just popped by to thank you for joining us at Allsorts in our Cute Christmas challenge.

A beautiful peaceful scene. And that's so great that you make cards to donate too - I'm sure they're much appreciated.

Thanks for joining us at the Crafty Friends Challenge.