The Magic (of) Animals

Today, and for the next two weeks, I have the honor be being a GDT at Quirky Crafts.   Their challenge has two sponsors, Bugaboo Stamps and Sweet Pea Stamps.  The theme is a fun one, "Magic of Animals," which I interpreted as animals which may have magic, like dragons!  :-D 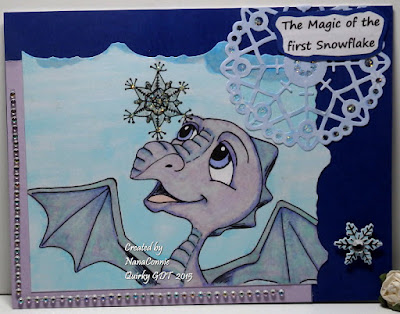 This darling dragon is from Sweet Pea Stamps and it's called "Snowflake Wonder."  I colored the image with ProMarkers and then used pale blue chalk to color in the snowy sky.  I added the darker blue clouds because that snowflake had to come from somewhere; I've never seen one fall from a clear sky!  :-D

I added some sparkle to the snowflake and cut the image piece by using a square die as a border die on two sides.  What you're seeing is the 'outside' of the die cut.   I added a large, die cut snowflake (Cheery Lynn die), and put some sparkle on it before layering on the sentiment.  The tiny snowflake embellie was in my stash.  I added the bling of two rows of small rhinestones to the lower corner.  Lots of glitter and bling on this card which celebrates every child's wish for snow on Christmas.

I'll see you again next week with another card for the Quirky Crafts mid-challenge reminder.  In the meantime, find something showing the magic of animals and come play along, won't you?  Happy Stamping.  NanaConnie
Posted by NanaConnie at Sunday, September 13, 2015

What a lovely cute image and love what you have with him.

awwwwww this is soooo cute, really a lovely card!
Thank you for sharing this with us over at Crafting for all seasons!

Hey Connie - welcome back! LOve that snowflake on his nose! And nice colors on that dragon's wing! Thank you for sharing your project and creativity with us at Aud Sentiments for our ATG challenge!
~ginny, Aud Sentiments DT
Owner: RubberMAD (GettyCollection.com)

What a cutie! This is a lovely creation. Thanks for sharing with us in our first challenge. Lisa DT Unicorn Challenge

Beautiful card, the image is so cute, but putting the snowflake on it's nose makes it even cuter. Thanks for joining us at Crafty Friends.

Congrats on the guest designer spot! That's great and I know they'll get it all straightened out soon.
Love the cute image and that snowflake on his nose! TOOO cute and fun. Very pretty coloring too!
Lynn

Thank you so much for being our Guest Designer, and sorry I forgot to add your gorgeous card right away!

what a sweet little dragon and your coloring is fantastic.
hugs,
Teresa

Gorgeous card, love the style. Thank you for joining us at Crafting For All Seasons. Good luck

Gorgeous card, love the style. Thank you for joining us at Crafting For All Seasons. Good luck

How very cute, love the details, thanks for playing with us at Crafting with Dragonflies, blessings Hilde

Quirky and sweet. Thanks for sharing with us at Crafting with Dragonflies for our current challenge.

Fabulous idea you have here. Love it. Thank you so much for joining us at Unicorn Challenge Blog this month. Hugs Traci DT xx

That is a cute dragon!!! Fun card and image and coloring. Super well done and perfect for the DRS Designs Cutie challenge! Thanks for sharing your card with us again - we love to see what you are up to. Hugz

Notations of a Crafter said...

Cute card, thanks for sharing with Simply Papercraft!

Very cute! What a fun image. I like the blue tones you chose here. Thanks for sharing it with us at Aud Sentiments, hope to see you again next challenge!
Jennifer, DT

Such a sweet image and adorable card :) Hugs...Janie

A very cute card! Thank you for joining us at craft and smash challenge!

thanks so much for sharing on craft and smash

Thanks for play with us at Craft and Smash challenge!