It's for the Birds!

Today we have a new challenge for you over at QKR Stampede and our theme this week is "Birds."  Any bird, flying, standing, strutting, dancing, drinking -- you get the idea.  QKR has a ton of fun bird images and, while you don't have to use a QKR Stampede image to play along in the challenge, if you do use one, you'll be entered into a separate drawing just for those who use a QKR image.  That increases your chance of winning immensely! 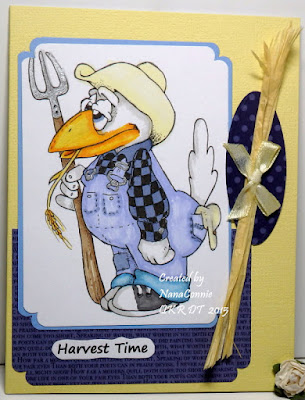 I used this sketch from Atlantic Hearts.

Albino or not, I had a lot of fun coloring this farmer bird with my Promarkers.  I die cut and matted him, then added a half-piece cut with a die one size larger, layered behind him.  I die cut the long oval and both of those papers are from SU.  For embellishment, I added the 'straw' and the bow.

Edited to  add:  I've had so many comments about the "straw" embellishment that I guess I should have told the story behind it.  I thought a stick of hay would make a cute embellie but I didn't have any in my stash.   Not even a bit of crumpled raffia was hiding away.  So, necessity being the mother of invention...  I cut a strip of plastic bag, up near the handle where there were already folds, and then folded it over a couple of times lengthwise.  I adhered it (under the bow) to keep it from unfolding, then took a pair of scissors and snipped into each end to make it look frayed.  It actually looks more like straw in the photo than IRL but it's good enough.  :-D

I hope we're going to see you entering our challenge this week .  Show us one of your favorite bird images and give us some inspiration.  Happy Stamping.  NanaConnie
Posted by NanaConnie at Friday, September 04, 2015

I giggled and giggled when I saw your card. Oh how I could use some giggling...thank you. I must get this image. Just when I think I have all I want you bring another image I don't have to life. Love it!

I can't wait for harvest time and weather to get here. This little guy is just so darn cute. Your coloring job is superb on him, whoever he is. LOL The straw is the perfect embellishment. Enjoy your long weekend.

What a fun card, I love the image, the way you've coloured him and the way you've put it all together. Great! Thanks for joining us at Cardz 4 Guyz
Jane

Oh! such fun, love his expression. AND your card.

LOL!!!!!!! I always say there's nothing cuter than an albino crow! I love, love, LOVE this! The touch of hay is sensational too. Precious and fun card.
Lynn

Hi this is a fantastic card the image is brilliant. Thank-you for joining us at the Crafts Galore Encore Challenge 21 Anything Goes. Hugs Jackie DT

Super cute!!! Thank you for joining us at Craft Your Passion, good luck!!! Amy DT

An albino crow!! LOL!! I think you've colored it beautifully and I absolutely LOVE the addition of the piece of straw!! So clever!! Happy Friday!!

Love this cute farmer and your 'straw' is brilliant. You sure had me fooled.
hugs,
Teresa

Wow, a white crow - why not! Love it! and when I looked at the straw, I thought you must have gone out and picked it from a field! You are so clever! Wonderful card you make me smile!

What a fun card...I love the digi you chose - nothing like a farmer crow :)
Thanks for joining us at Atlantic Hearts Sketch Challenge this week.

Great card! Love the shapes you used and that stamp is so cute! Thanks for playing along at Atlantic Hearts!

Such a fun image and I love your mini tutorial with the straw. Thank you for sharing this with us over at Crafting from the Heart. Sue DT xx

Sweet card.
Love the colous you used.
Thanks for joining us at CCC Digi Creations Challenge and good luck.

Great use of your Trio of Color! Thanks for sharing with us at Simon Says Monday Challenge. Cheers Nicole

Isn't he just the cutest farmer you've ever seen!
Love your take on the sketch too!
HUgs
Dawn xx

A super created card, brilliant colouring the farmer. Thanks for joining in the fun at Cardz 4 Guyz. Caz DT

Great take on the Atlantic Hearts Sketch! The plastic bag straw idea was brilliant! Add the crow is adorable!

Such a fun card! Fabulous job! Thanks for joining us at Atlantic Hearts Sketch Challenge! Jess - DT

Fun card! Love the coloring and the playfulness! Thanks for joining us at Atlantic Hearts Sketch Challenge!
Linda - DT
www.scrappytherapy.com

Thank you for playing along with our Challenge at CCC Digi Creations. We would love to see you again. Anet DT x

Notations of a Crafter said...

Such a fun card love it. Thank you for joining us at Crafting for All Seasons. Helen DT xx

Thanks for playing along at I love Promarkers. Good luck in your challenges
Liz x

Thank you for playing along with our CCC Digi Creations Challenge. We would love to see you again. Anet DT x

Adorable card, love your farmer bird!!
Thanks so much for joining us at Artistic stamper challenge this month.