I have to share a minor 'tragedy' which has affected my ability to use digital images for the time being.  A little bit of history before I explain - about 5 years ago, I suffered a huge computer crash, had to replace my computer, and was unable to retrieve anything from my hard drive.  At that time, I probably had close to 1,500 digital images from 50 or 60 different companies.  Needless to say, I was heart broken.  But I learned from my mistake and, when I began rebuilding my digi collection, everything was saved straight to a thumb drive.  No more hard-drive-crash-danger in my future!

A little over a week ago, I went to the thumb drive to get an image I wanted to print and discovered that all my digi files (saved in folders by company name) between the letter "C" through and including most of those starting with "S" were gone!  Those missing files happened to include digis from three of my Design Teams so this was a rather serious problem.  From now on, I'm downloading all digis to both a thumb drive and the hard drive!

I began searching with various tools to see if they could be recovered (I'm NOT technologically skilled) and while I had little luck in actually finding them, I did figure out that the files were probably still on the thumb drive, but for some reason they had just become "invisible."  At that point, I turned the thumb drive over to someone much more savvy than I, and began looking thought my physical folders of stamped images waiting to be colored and used.  Many of those had been stamped by other people and given to me over 3 or 4 years of meeting with my craft group.

I also dug out the rather limited number of rubber stamps I still have (I did a through clearing out job a couple of years back but there are always certain stamps one just can't give away.)  When I say "limited number," I'm comparing that to the literally hundreds of rubber and clear stamps I had at that time which now has been narrowed to about 100.  So, I'm not precluded from card making but over the next few weeks, you may find me talking about stamps from unknown sources which means I'm using an image someone else stamped and gave to me.  That's the case with today's card which has these lovely hybrid roses. 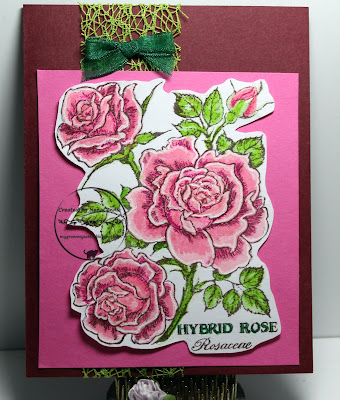 Colored with gel pens and ProMarkers, then fussy cut with scissors.  Pop Dots used to mount it to a scrap of pink CS.  Mesh ribbon and sheer ribbon for the bow are both scraps and the bow was 'dyed' with a ProMarker to get the exact green I wanted.
Challenges:
Artsy Stamper
Aud Sentiments
Creations in Pink
Creative Crafters
Creative Knockouts
I love ProMarkers
LeAnn's World 101
Outlawz Festive Fri
We Love Choc Baroque
Word Art Weds
Have yourself a great day and Happy Crafting.  NanaConnie
Posted by NanaConnie at Tuesday, September 22, 2020

I hope you can get them recovered. What a huge disappointment. [Bunny]

Sorry to read that you have been unable to access so many of your digital files, hopefully they can be recovered, love your beautifully coloured stamped image

Oh my God! This was a shocking experience, Connie. Hope you will retrieve everything. And for you card, it is GORGEOUS! Hugs, my friend.

Oh no really hope they can be recovered

So very pretty, those roses are beautiful!

Thank you so much for joining us at Creative Knockouts!

The roses are gorgeous, but my what an ordeal. I hope you can recover your images. Hugs, Teresa

Oh NC- I am going through the same issue! I lost about 5000 digital images...... However, your image looks like a PSX, although I do not know for sure- it is gorgeous! And, beautifully colored!!! And, I love pink : )

What a nightmare, technology is great when it works but when it doesn't......I had a computer crash last year and although no digital images as I'm a rubber girl, I lost so much information so really sympathise.

I have no idea of the make of this stamp but they really are beautiful Roses and coloured to perfection, thank you so much for joining us at We Love Chocolate Baroque's first challenge.

Creative and absolutely lovely design and thanks for entering into our "RIBBON/BOW" challenge, hope to see you again soon .. ♥

ARTSYSTAMPER DIGITALS. Good luck in the draw. . Love to see you next challenge.

Beautiful rose image, Connie and you have done a beautiful job coloring it.
I save my digis to my PC but also have a continuous backup service that saves them to the cloud so that I have them elsewhere too. If you have a Google account, you could save them to Google Drive in addition to your harddrive so you have an off-site backup.
Hugs Monica

Thanks for joining us at leAnns world 101

Fabulous card.
Thank you for sharing at We Love Chocolate Baroque Challenge;-))m

Just beautiful Connie! Thanks so much for playing in our challenge at the Artsystamper Challenge Blog! Good Luck in the draw and hope to see you again next challenge!

Wonderful creation! Thanks for playing at I Love Promarkers Challenge.
Ileanaxx

I have woefully neglected my email and am so far behind I couldn't possibly catch up in commenting on all the blogs I follow. That said, I had to pop in and tell you that the time has come to back up to a cloud service. Now, I dislike the idea of backing up photos to just any cloud service. I don't want my family photos being used in advertisements in foreign countries without m knowledge and reimbursement. That said, my digital elements (stamps, papers, svg's, etc) are all backed up to the cloud. We have used a company called pCloud for the last 6 years or so and are happy. I think in the unfortunate event that they ever got compromised by a hacker, that hacker would be incredibly bored with my collection of weird images and sentiments and such. I don't put any financial docs on the cloud server. The only company I trust for electronic storing of data completely is Evernote, which is a topic for another day and not the best option for your digis. For digis, find yourself the cheapest cloud storage option. It may be a few $ a month, but you have so much invested in them that. pCloud has a $50 per year price for one plan or a $125 lifetime plan for an unlimited # of files. Best part is that they are accessible anywhere you have internet. Vacationing with family across the country? You still have access. Trying to plan a card while sitting in the waiting room at the doctor's office? You have access on your phone. Doing some online shopping while waiting for the grandkids to finish soccer practice and need to make sure you don't already own the set you are looking at? You have access. Use a PC upstairs and a laptop downstairs? You have access on any device, anywhere. And you set it up with folders and subfolders just like you already do so its easy to copy/upload from your current storage location. Upload times will vary on your internet speed. We set our to upload during our sleeping hours. Took longer than it would have if we let it upload nonstop til complete, but it never interfered with our internet demands during working hours (hubby has worked remotely from home for 7 or 8 years now). I can vouch for pCloud but I'm sure many other cloud storage plans are great too. Hardware only lasts a few years at best... even the NAS we had which was supposed to be the be all end all of home storage; it only lasted 3 years. I've not regretted putting my crafty files on the cloud. I hope you consider it for peace of mind if nothing else. Take care and hope your files can be restored!!!

Lovely creation, thanks so much for sharing it with us at Creative Crafters and wish you luck with your entry...hope you will join us again next month!
Hugs Donna (DT) xx