On this Memorial Day, let's remember
why it's on our calendars and honor those
who fought for and even gave their own lives
that we might enjoy our Freedom.

This fun and slightly distressed (ok, a lot distressed!) monster is the Progressive Challenge image from Limited Runs for May/June.  The expression on his face just shouted that he had tasted his coffee and found something horribly wrong.

It reminded me of an incident when I was probably 10 or 11.  I wanted to do something really special for my dad on Father's Day.  He was never one for big, noisy, celebrations, especially when he was the object of them, and he had announced that he planned on going off early in the morning to spend the day fishing; no fuss, no muss, no celebration.  After a few minutes of begging to go with him, he agreed and I said I'd fix the picnic basket of lunch and snacks.

I suppose I made sandwiches or maybe even potato salad (one of his favorites) but what I really remember was the thermos of coffee.  He loved coffee and drank it year round, cold weather or hot.  His coffee thermos went everywhere with him.  I made coffee as soon as I woke up and, because I might end up drinking some of it myself if there was nothing else available, I added a bit of sugar since I really didn't care for the taste of coffee back then.  It's an acquired taste, you know.  :-D

We were probably 10 or 15 miles from home when Dad had me pour him his first cup from the thermos, and his face turned an apoplectic red, then white as he swallowed a big mouthful.  Dad took his coffee black - no adulteration allowed!  He looked just like that Coffee Monster!  lol  As I remember, we turned around, went back home, remade the coffee, and then went fishing.  He never scolded me about it but it remained a long-standing joke between us for the rest of his life.  :-D

OK, after that rather long story, here's my card. Consider it a salute to the greatest dad who ever lived (and a WWII vet, also!) 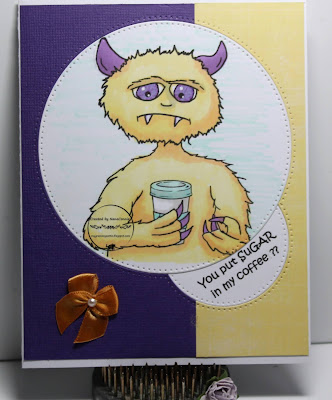 Take a moment and thank a veteran, won't you?  Happy Crafting.  NanaConnie
Posted by NanaConnie at Monday, May 25, 2020

a lovely memory and a great card

Lovely card, and a great story to accompany it!

Great story. You're right about it being an acquired taste. And to change it up on him it just cracks me up that he came all the way home to fix a new thermos full. Cute card. [Bunny]

Super cute card and I can just imagine how your dad must have looked after gulping down that coffee. Fun memory! Love the expression on that fact - cute image and your card is precious.
Lynn

oh.....and thanks for joining us at Pammie's Inky Pinkies too!
Lynn

I like your dad story, I hope you had a nice day fishing together afterwards. Fun card. Thanks for sharing with us at Incy Wincy, CarolG

Cute card your Dad will love. A great memory too.

I saw your card on the 2020 Spring/Summer Coffee Lovers Summer Blog Hop and thought I would pop by. Cute card!

OK, this guy is absolutely too cute for words! The colors are just perfect!! Love him Connie! Perfect masculine style card too!

What a great story! I enjoy a little sugar in my coffee. Your monster card is lovely.
Hugs Monica