Music in My Ear

The image I used today came from the Progressive Challenge at LeAnn's World 101.  The sentiment came from a memory that goes back 50 years!

One of my first 'serious' boyfriends was drafted into the Army when he was 18 (3 weeks after signing up for the Selective Service as required by law and I thought it was the end of the world.)  The first time he was allowed to make a phone call when he was going through Basic Training, he called me - not his mom or anyone in the rest of his family, but me!!  lol  During that conversation he said to me, "Your voice is music in my ear."  Most telephone calls we had from that point on, he would repeat that phrase and it became a thing between the two of us.  As happens with puppy love, we drifted apart and moved on to meet and marry other people, each of us having families of our own.

As soon as I saw this image, that phrase popped into my head and I thought about him even though we completely lost touch years ago.  Funny how memories stay with us even decades later.

I'm using this one for a masculine birthday card. 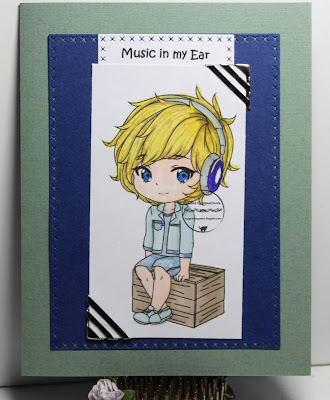 I LOVE your card, but have to admit to loving your story too. Yes things can pop into your head like that. I always remember a boyfriend who bought me a box of Dairy Box chocolates every week. I got bored with the same thing so finished with him! I was 14 LOL. Everytime I see the chocolates in a shop I think of him, even 60 years later!
Faith x

Your card is so adorable and how perfect for a teen! What a fun story and it's always funny how our minds work in that way and what things we remember at a much later time. Thanks for sharing! :)

Precious card Connie and what a wonderful memory! So sweet.
Lynn

This is a lovely card for a (little) boy. So cute how he is sitting and listening to the music.
Thanks for joining us at DAK!

Great card for a young man. Like the layering you did.

Cute Image! This goes perfect with our current challenge “Anything Goes” at Patties Creations Design Challenge. Thanks for joining us…
Pattie
Artist and Owner

Oh what a cool and cute creation! FAB done!!!

Thanks for playing along with our Do-Al(l) Kreatives Challenge and good luck!

Lovely card and thanks for sharing the memory with us. Sweet story.
Hugs Monica

Just perfect for the Challenge!
Great project!
Fabulous that you have shared this with us here at Colour Crazy.
Good luck and we hope you will come back again! Jackie DT

Thank you for your contribution to our March 'the eyes have it' challenge over at Country View Challenges.
Corrie xx

Beautiful card for a little boy! Love the image!
Thanks for playing along with us at our present challenge at Do-Al(l) Kreatives and good luck. Hope you will join us next month again.

Lovely card, thank for sharing it with us at the Colour Crazy Craft Challenge Janet DT