Harvest on the Veranda

When I saw this freebie image from Beccy's Place (for their challenge this month), I was instantly taken back to my childhood !  My grandparents lived in a large house (which seemed huge to me until I drove passed it 50 years later and realized it was large but not the size I had in my memories) on a few acres of land, and they had fruit and nut trees plus a large plot on which they grew vegetables, corn, and a small patch of wheat, oats, or rye, rotating them every year.

Every autumn, they would harvest apples, pears, pumpkins, potatoes, and whatever other veggies had ripened later than the usual summer picking.  Those marvelous things would always end up piled on the veranda which completely encircled the house.  Grammy would pull up chairs and baskets and we would sort through everything, dividing up things which would go to neighbors and friends, and larger quantities which would go to market.  There was always a huge pallet packed with boxes of things which would be donated for distribution to those who weren't as fortunate.

Grammy had a favorite straw hat which she always wore when tending the garden and it often hung on the back of a chair when we worked in the shade of the porch.  So you can see why I grabbed this image right away and had to do this card - a salute to my Grammy.  And, yes, to answer your unasked question, my blog is named for this same Grammy but that's a different story.  :-D

Thank you, Beccy, for the fabulous memories!

The theme at the Beccy's Place challenge is always "Anything Goes" but Beccy gives us an option which we can use if we want to challenge ourselves a bit.  This month, the option is to CASE something you have made previously and I did that.  I CASEd a card I did only two or three weeks ago.  You can see that one here. 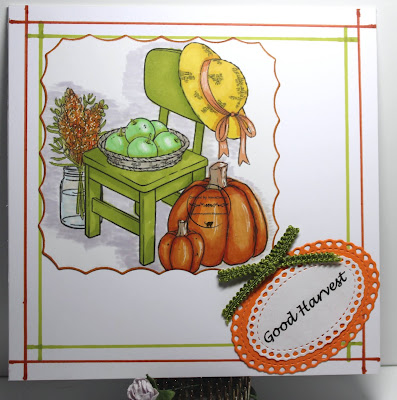 Have a great day and Happy Crafting.  NanaConnie
Posted by NanaConnie at Thursday, September 10, 2020

How wonderful to read about your childhood memories... thank you for sharing NanaConnie, it sure sounds like you had a wonderful time with your Grandparents. You did a fantastic job colouring the image. I really like the addition of the light grey around the outside to ground the different elements. I also like the way you've taken the image just beyond the border, it gives the impression of continuity. Fabulous!
Cheers,
Beccy

A wonderful beautifully coloured image and CAS card,loved reading about your childhood memories

What a great story. It reminds me of my grandparents. My grandfather would drive to a city to glean the grounds after the harvest. They let all the poor people go in and glean which was great. He would get enough to share with the neighbors up and down the street. The neighbors did the same thing when they could. Mama said they stored the potatoes underneath the house (not touching or they'd rot) so that they would stay cooler and last longer. There were 10 people to feed in my mama's house when she was growing up. I love that the neighbors all shared. These days most people don't even know who their neighbors are. [Bunny]

Beautiful card and such a heart warming memory to have. I miss the days spent with my grandmother's. One canned goodies the other baked yummy goodies. Fantastic card, hugs, Lori m

Wonderful story that bring back many wonderful memories of my grandparents. Thanks for sharing. Your card is awesome with wonderful coloring. Hugs, Carol

I love your family story Connie, wonderful happy memories which show in the image, coloured so beautifully.
Faith x

This is so beautiful. Nice work looks great.
Thank you for sharing with us over at Morgan's Artworld. We hope to see you again.
~ Annette DT

What a great story, Connie. We have lost something in the passage of time and the hectic pace of life. You card is lovely, beautiful coloring on the image.
Hugs Monica

Beaytiful card and history. Thank you for sharing with us over at Morgan's Artworld Open Challenge. Love to see you join in each month.
~ Danka DT

I love when you share about your childhood, Connie - especially knowing the story behind your blog's name. It's a beautifully detailed card with pretty colors and fantastic shading! Thanks for the story about your Grandparents! hugs, de

Beautiful creation! Thank you for sharing with us over at Morgan's ArtWorld. We hope to see you again.
~ Sherry DT/Admin/Coordinator xx

Beautiful creation and story Connie! Thank you for sharing with us over at Morgan's ArtWorld. We hope to see you again.
~ Sherry DT/Admin/Coordinator xx

Fabulous;ous creation! Thank you for sharing with us over at Morgan's Artworld. We hope to see you again.
~ Judy DT