I got an image a few weeks ago from Beccy's Place and am so in love with it!   In a way, it's kind of sad and nostalgic because happy mail so rarely arrives in our actual mailboxes anymore.  Everything is email or text message, or the occasional fax (and even those are dying out!)  I've done half a dozen cards with it, using different color combos each time and you'll see two or three of them over the next couple of months.  This first one is done in monochrome blues. 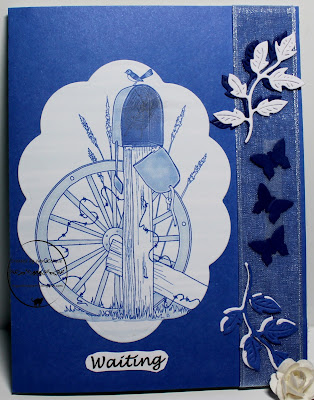 I based my design on the sketch from
My Favorite Things, flipped side to side. 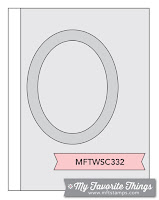 I used watercolor pencils and ProMarkers to color this one, then cut it with a die from Spellbinders.  I also cut the blue background with the same die and inlaid the image into it.  I added the sentiment and then wrapped the card front with sheer ribbon.

The butterflies are cut with a die from Press Cut and the leaves are die cut from three different shades of blue CS (Cheery Lynn die.)   That Cheery Lynn die is probably my favorite small die of all time.  I remember being concerned about the cost of it when I first debated buying it because, up to that point, I had pretty much only used framing dies.  I decided to order it and I think I have used it more than any other small die I own.  Why did I even hesitate?  lol  Once I tried using it on something other than green CS (being so literal minded at that time), I discovered exactly how versatile it is, not only with flowers but by itself or layered with multiple shades as I did here.