I'm so excited about today's card.  I made it because I was invited to be a Guest Designer at Pixie's Crafty Workshop, better known as "The Playground."  Each challenge runs for two weeks and we're already one week into the current challenge so this card serves as the half-way reminder.  Themes are always Anything Goes but there is a requirement that you use 'snippets' - you know, those bits and pieces of scrap that we feel so good about using up instead of tossing them into the trash. 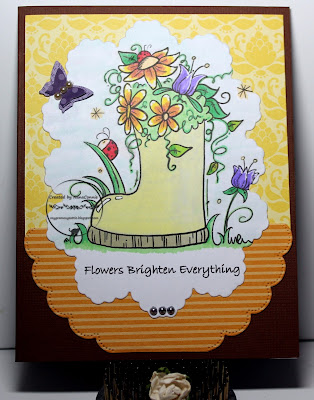 The image is from Bugaboo Stamps, printed onto a scrap of white CS, and colored with ProMarkers and polychromos pencils.   I used a Sue Wilson die to cut it.

The striped dp is from Stampin' Up and it, too, was a scrap.  I trimmed it into a rectangle, then used a Memory Box die to cut the scallops.  The die is actually a circle but because the paper was a scrap, that's the shape which resulted from cutting a narrow rectangle with a circle die.  I rather like it!  :-D

The yellow dp on the upper part of the card is another scrap and I trimmed it to fit the width of the card.  I cut the double butterfly with another die, this one from Presscut, and the paper was double sided so I got two layers for the butterfly even though the paper was nothing more than a very tiny scrap.  I layered them together and added three tiny pearls which were left over from another project.

Check out The Playground this weekend and then come play along.  Dig out some of those left over snippets and join us.  :-D  Happy Crafting.  NanaConnie
Posted by NanaConnie at Saturday, March 24, 2018

Beautiful love the boot and the Flowers
This is so sweet. I love it.
Thank you for joining my DL.ART Thankful Thursday #225 "flowers" Linky Challenge. Have a blessed day
DIANA L.

Love this spring look - thanks so very much for joining us this time at the Creative fingers Challenge, Elizabeth (DT)

Love this card! Thank you for joining our challenge at Lil Patch of Crafty Friends! Good Luck!
Tracyx

Connie, this is SO LOVELY! I love the way you framed out that pretty image. Congrats on the guest designer spot too! Di's the best.
Lynn

Thank you again for being our GD in the Playground! I've changed the link in my post so that folk will come directly to this post - again, such a lovely card!

I love this image- and it is making me look towards to the flowers blooming when the Spring weather starts rolling in here! I love your coloring and fun use of the half die- really like that idea! Wonderful card NC!

Aaah spring, your delightful card makes me impatient for it to arrive in my neck of the woods lol!
hugs
Glenda

AH! Connie, this is so pretty, love how you have coloured those flowers and the boot, pretty papers and die cuts too.
Faith
x

Sweet card, thanks for playing along at Catch The Bug.

Love this project! Thanks so much for joining us for our Photo Challenge, I you will join us again soon!

Beautiful spring card. Have a Happy Easter. Thanks for playing with the Catch the Bug Photo Inspiration Challenge, Lisa Lynn DT.

Beautiful card and I love the spring yellows. Thank you for sharing with us at PoP. Pippa DT